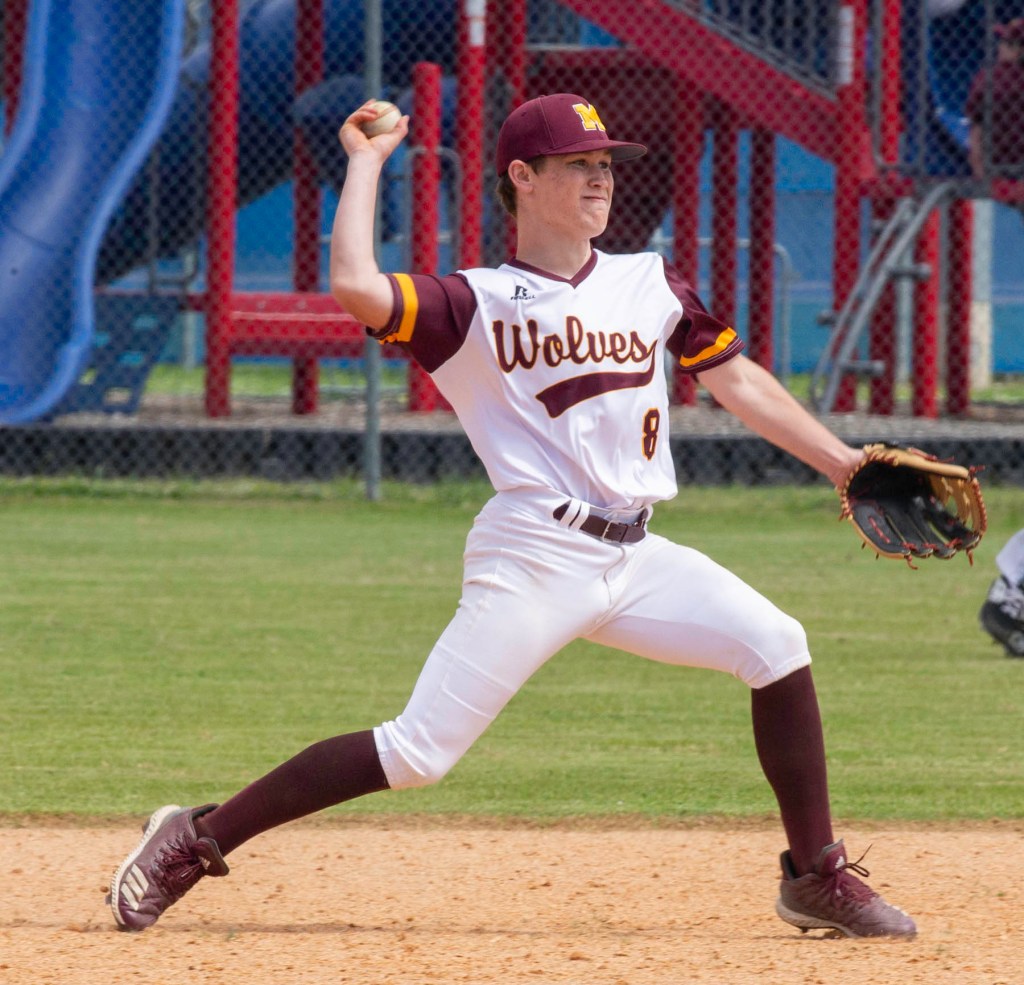 Monterey senior Mason Wells throws the ball in a game on March 18. Monterey had not won a playoff game since he was in eighth grade, Head Coach Eric Richard said. (Bill Barksdale for The Natchez Democrat)

HERMON, La. — Monterey High School’s Ethan Clark held Mt. Hermon High School to just three hits and struck out 10 batters in a complete-game performance as the No. 20 seed Wolves upset the No. 13 seed Yellowjackets 3-1 Tuesday afternoon in the bi-district round of the 2021 LHSAA Class B Playoffs.

In what was a pitchers’ duel between Clark and Mt. Hermon’s Grayson Painter, Clark gave up just one run, none after the first inning, and walked just one batter in his seven innings of work. Painter also went the distance and gave up three runs on seven hits, struck out 10, and walked four.

“It’s how we’ve gone all year,” Monterey Head Coach Eric Richard said. “When Ethan throws the ball well, we have a chance to beat everybody. He’s been consistent all year.”

Monterey, which got in despite a last-place finish in District 6-B, took a 1-0 lead in the top of the first inning on a sacrifice fly by Mason Wells, but District 8-B co-champion Mt. Hermon (13-10) tied the game in the bottom of the first.

The Wolves took the lead for good with two runs in the top of the third inning. Jake Crawford singled in what proved to be the go-ahead run to give them a 2-1 lead. Later in the frame, Monterey had runners at first and third. The runner at first tried to steal second and on the throw from the Mt. Hermon catcher, the runner at third scored for a 3-1 Wolves lead.

Crawford ended up going 2-for-3 with a double and one RBI to lead Monterey at the plate.

“We didn’t have a great day at the plate. But it was enough to win,” Richard said. “We played good defense behind (Clark) and scored enough runs to beat a good baseball team.”

The two-hour and 20-minute drive from Monterey to Mt. Hermon, which is located in northwestern Washington Parish, was well worth it for a Wolves team which last won a playoff game in 2017.

“Anytime you win a playoff game, it’s good,” Richard said. “This group of seniors hasn’t won (a playoff game) since they were eighth-graders.”

Monterey (9-10) will travel across the state to take on No. 4 seed Zwolle High School in the regional round at 2 p.m. Saturday. Zwolle enters the playoffs with an 18-10 overall and finished in a three-way tie for first place in District 4-B with No. 5 seed Florien High School and No. 7 seed Converse High School.