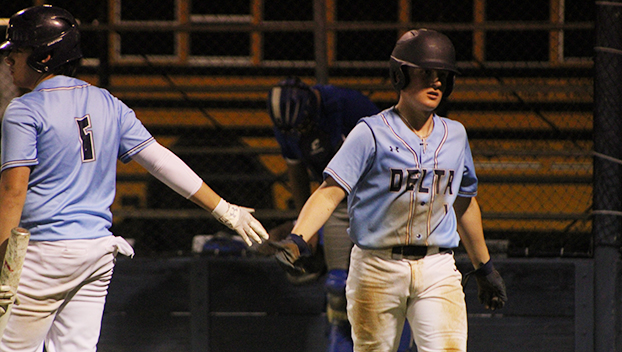 From left, Drew Brown and Peyten Roberts slap each others hands after Roberts slid into home plate for Delta Charter. (File Photo, The Natchez Democrat)

That turned out to be a good decision as Drew Brown threw a no-hitter and struck out 12 batters as the No. 4 seed Storm cruised to a 10-0 win over the No. 13 seed Tigers in six innings to advance to the quarterfinals.

“Drew almost had a perfect game. Twelve strikeouts and no hits. He hit a couple of batters. He set the tone for the game,” Delta Charter head coach Mason Ozburn said. “I couldn’t ask for a better performance from him.”

While Brown was having his way on the mound, it did take a few innings for Delta Charter’s bats to get going against East Iberville’s N. Martin. The Storm only managed to score three runs over the first two innings and was only up 3-0 heading into the bottom of the fourth.

“They threw a guy at the plate who was a little slower than normal. It took a couple of innings to figure him out,” Ozburn said. “We did leave too many runners on base. We left the bases loaded twice. We should’ve scored more runs than we did. But a win’s a win.”

Grayson went 2-for-5 with a double, one run batted in and three runs scored. Payten Roberts was 2-for-4 with one RBI and one run scored. As a team, the Storm had 10 base hits and took advantage of 11 East Iberville errors.

Martin ended up going five and two-third innings, allowing 10 runs, only one earned, on 10 hits while striking out seven and hitting two batters. The Tigers finished their season with an overall record of 7-15.

“It was a great victory. Something we needed as we look forward to the next round,” Ozburn said. “The rain has really slowed things down. That’s why we played (Thursday).”

Next up for Delta Charter (9-12) is the winner of the game between No. 12 seed Slaughter Community Center and No. 5 seed Logansport High School, which is scheduled to take place next Monday at 4 p.m. at Logansport if the weather permits.

Also in Class 1A regional round action, No. 16 seed Block High School will play at No. 1 seed Oak Grove High School Monday at 5 p.m. at Tiger Field. The Bears took care of No. 17 seed Plain Dealing High School 12-2 in five innings last Wednesday afternoon in the bi-district round.