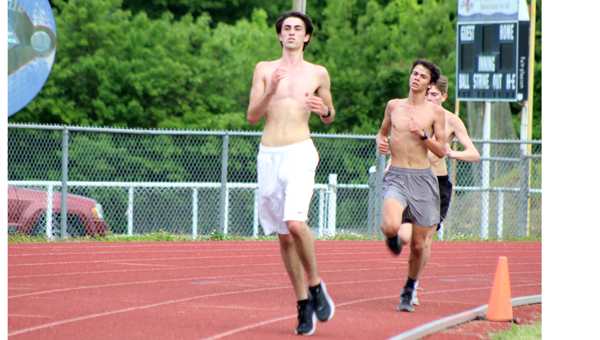 “I like to run for Cathedral. I have been doing it since seventh grade,” Skates said. “Its my last year, but (the emotions) haven’t really kicked in yet.”

Skates will run for Millsaps College in Jackson when he graduates. He said he really liked the coach Andy Till and he has met some of the guys on the team and it seems like the right place for him.

Burget is a sophomore, and he has also run since he was in seventh grade. He said he is just trying to live up to Skates and get to where he is. Skates said Burget would run an extra two miles before practice.

“He will be good,” Skates said. “The team will be in good hands. I like knowing that because I’m probably going to come back and watch some meets next school year. I hope to see him (Burget) in first place.”

Before a race, there is a lot of anxiety that builds up, but Skates says he uses it to amp himself up by jumping. He uses it to his advantage by getting his heart pumping and his legs ready to run.

The two have a pre-race ritual to conquer the anxiety and to get their legs ready to run. Skates said they would run down a football field twice to accomplish this. Head Coach Tommy Smith says it works, so Skates and Burget believe it works, they said.

“I’m just going to glance at my watch a little bit and try to map out my pace,” Burget said. “He (coach) will call out my splits and stuff.”

The Green Wave is losing horsepower when Skates crosses the finish for the last time as a Green Wave, he said. They are also gaining horsepower when Burget steps up to the starting box this cross-country season. Smith said it is a blessing for the team to have a sophomore like Burget to push themselves to be as good as a leading senior like Skates.

“Two years ago, they both got interviewed and I picked who got interviewed,” Smith said. “I already had that vision of what was going to happen. He (Skates) wasn’t even thinking about being out of school yet, and he (Burget) was just getting his feet wet.”