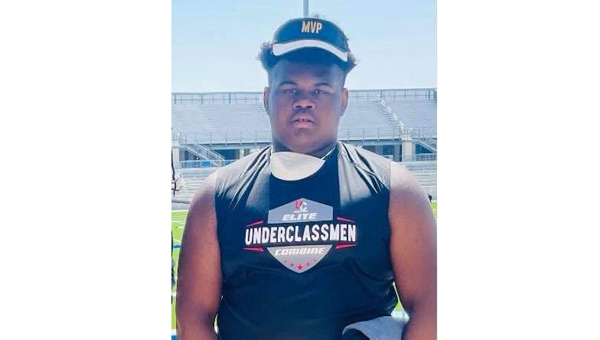 He said he was named the MVP of the camp, as did offensive line coach Mathew Freeman. Green said going to the ESPN 300 Underclassman combine was a great experience because he competed against football players from Texas and the world.

“Winning the MVP was a great feeling because I was putting on for my school, my hometown, and my family,” Green said. “I trained hard, worked for it, and came out victorious.”

The camp helps players with recruitment because there are a lot of coaches there. Whenever he would make a play, he could see the coaches talk about it, he said.

He is a Natchez native, an Alabama football fanatic and he is known as Big E. The sophomore is six foot, four inches tall and weighs 300 pounds. Green has played on the offensive line for most of his life except for a few years in little league football where he played running back.

His dreams as a kid were to put on the blue, white and gray uniforms of the Dallas Cowboys and play on Sundays, he said. Alabama Crimson Tide is his lifelong favorite college football team.

Green’s favorite offensive lineman is former Alabama center, Landon Dickerson. He is in the 2021 NFL draft. Green was born and raised in Natchez and looked up to Natchezians Steven Ridley and Rico Richardson who went on to play football in the NFL.

“They treat me like family,” Green said. “It is a winning program. The coaches treat me like I’m their own son. I love winning. I like that feeling.”