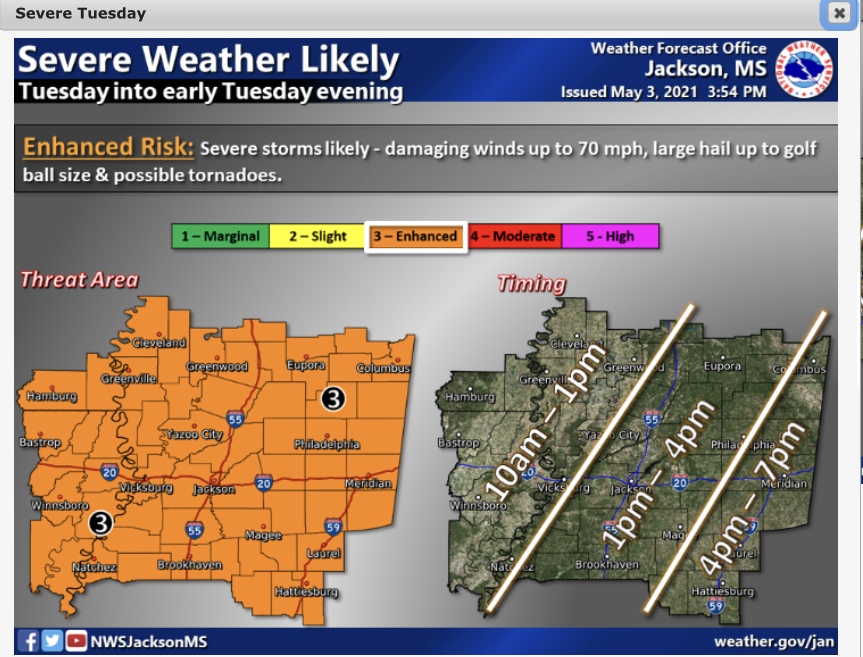 NATCHEZ — Adams County residents may be in for a rocky morning and afternoon on Tuesday.

The National Weather Service at Jackson predicts severe storms for the Natchez area beginning at approximately 10 a.m. and continuing into the afternoon hours.

The forecast calls for a chance of showers, then showers and thunderstorms after 10 a.m. Some of the storms could be severe. High near 82. South southwest wind 10 to 15 mph, with gusts as high as 20 miles per hour. Chance of precipitation is 90%. New rainfall amounts between three quarters and one inch possible.

A 30 percent chance of showers and thunderstorms are forecast for Tuesday night, mainly before 10 p.m. Mostly cloudy, with a low around 59. South southwest wind 10 to 15 mph becoming north after midnight. Winds could gust as high as 20 miles per hour.

Sunny skies return on Wednesday, with a high near 75. North wind around 15 mph, with gusts as high as 20 mph.

The forecast for Natchez calls sun and clear skies through the weekend after Tuesday’s storms.