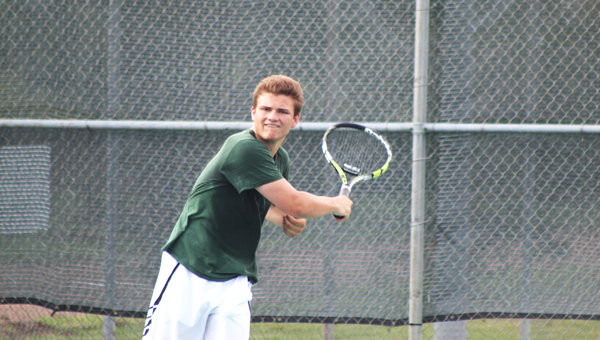 Aiden Whitaker is a senior at Cathedral and is more reserved on the court. Cate Drane is a junior at Cathedral. She is vocal on the court and head coach Beth Foster said she paired her with Whitaker because he can take her criticism in mixed doubles. (Hunter Cloud The Natchez Democrat)

Cathedral’s Aiden Whitaker and Cate Drane are headed to the State Tennis Finals in Vicksburg to play as a mixed doubles pair on Wednesday. The two had not lost a single match this season.

Drane is confident they will start with a win and keep the momentum going. Whitaker is laidback and said he tries not to stress out too much about the state finals.

Instead, he tries to stay focused on practicing and not let the moment get to his head, he said. The two are opposites, Drane is outspoken, and Whitaker is calm and reserved.

“We had to pair Cate with someone who had a strong personality that could handle Cate’s criticism,” Head Coach Beth Foster said. “Aiden does, he takes it very well. We don’t want anyone to get their feelings hurt, and Aiden is not going to let his feelings get hurt.”

Drane said her criticism is good because it is what drives the pair to perform well. Whitaker said he does not mind the criticism by Drane.

“It helps to see what mistakes you make and how you can improve on that,” Whitaker said. “It is good to have someone to notice what you are doing wrong and to give you feedback.”

Whitaker said he gets a little mad at himself on the tennis court, but he tries to keep his frustration under control. He said he tries to learn from his mistakes and focus on what he needs to do.

“Boys at a high school level are a lot more aggressive with the ball. Girls try to keep the ball in,” Drane said. “I have to take that and try to focus on keeping the ball in and not slam it back too.”

Their favorite moment of the year was when they beat Brookhaven Academy despite being dehydrated and going to a tiebreaker. Drane said she was mad because they were about to lose, and then they rallied to win.

He said ahead of his last appearance for Cathedral, if he does not give 100 percent, he will regret it later. Foster said he truly gives 100 percent in everything he does, adding she wishes she could have a whole team of Aiden Whitakers.

“It is kind of a weird feeling, knowing if you do bad it can be it,” Whitaker said. “There is some nervousness that any game could be your last. Every match I go to, I play the best I can so I don’t have to look back and regret that I didn’t.”