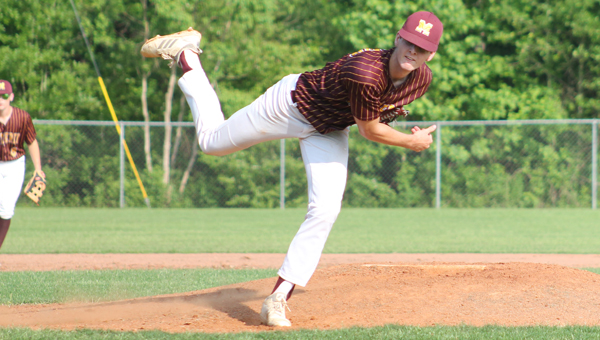 Senior Ethan Clark pitched a complete game as the Wolves won 5-2 Monday night in an upset win over Zwolle. They will play Friday at 5 p.m. (Submitted Photo)

“It was a good win. The last two games we played were probably the best we have played all year,” Head Coach Eric Richard said. “We are getting healthy and playing with a bit of confidence. That can carry you a long way this time of the year.”

The Wolves jumped out to a 3-0 lead in the first inning and never looked back. Senior Ethan Clark pitched a complete game giving up two runs. Monterey held Zwolle to 0 runs in the first inning. Richard said they played one of their best games of baseball.

The first inning gave the team confidence, he said. Zwolle scored a run in the second and third innings to make it 3-2. Ethan Heard singled to score Clark in the fourth inning to make it a 4-2 Wolves lead.
Heard hit a single, scoring an insurance run in the top of the seventh inning to take a 5-2 lead. He led Monterey with three RBIs.

Jake Crawford and Kerry King had missed many of the games due to injury this year. Richard said the Wolves field a stronger team with them back. Monterey also pitched well and did not commit any errors in their win.

The semifinals are the furthest Monterey has ever gone in the playoffs. Richard said they did it in 2014 and 1997. Monterey’s win against Zwolle means they are one game shy of playing in the semifinals.

“We enjoyed the win. We are excited about it, but we have to start the process of the next game,” Richard said. “I know the kids enjoyed it, and they were happy. We will come back (Tuesday) with practice and try to carry that confidence and momentum from that game. We can’t be satisfied with what we have done. We have to be as hungry again.”

Monterey will take on the No. 12 seed Pitkin at 5 p.m. Friday in Monterey.