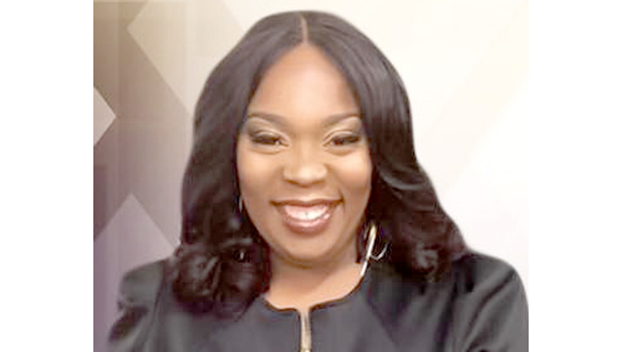 NATCHEZ — The Natchez Mayor and Board of Aldermen appointed Robbie Cade Furdge to fill a vacant position on the city-appointed Natchez Convention Promotion Commission during the city meeting last week.

“I am excited to be a member of this incredible board and I look forward to the exciting things ahead and what the future holds for the City of Natchez and tourism,” Furdge said of her appointment to the commission.

Furdge is associate pastor of Word of Faith A.W.C. — which has three locations in Natchez, Ferriday and North Texas — under the leadership of her biological and spiritual parents, Rev. Robert and Betty Cade. Furdge is also the co-owner of Rolling River Reloaded — located at the former Rolling River Bistro on Main Street.

She is a 1997 honors graduate of Ferriday High School and furthered her educational studies at Alcorn State University, receiving a Bachelor of Arts degree in English Literature and Foreign Language. She did additional coursework and program studies at Louisiana Tech University and the University of Louisiana at Monroe and has served as a secondary English instructor and an assistant principal.

She later continued her educational pursuit at Word of Faith Bible College where she obtained a Masters of Religious Education in 2011 and a Doctorate of Theology in 2013.
She currently serves as an educational consultant, business consultant, project manager and life coach for professional athletes.

McCabe said Lavada Hill resigned from the commission on May 14, 2020, creating the open commission seat that Furdge will fill.

The NCPC was established by Mississippi legislature for the purpose of encouraging and promoting tourism for the Natchez and Adams County area and is appointed by the Natchez Mayor and Board of Aldermen.

Alderwoman Sarah Carter Smith, who serves on the city tourism committee with Alderwoman Valencia Hall and Felicia Irving, said the committee considered a total of seven people who applied to the position and narrowed the list of applicants down to three finalists for the board to interview as a whole during a closed meeting Tuesday, April 27.

The candidates recommended by the city tourism committee were Eugenie Cates, Neifa Hardy and Furdge.

After the board returned to an open meeting, Frazier and Irving both said the board should interview other candidates before making a decision. Alderman Dan Dillard said he wished the board would consider appointing Cates, who is currently the executive director of Natchez Pilgrimage Tours, to the commission instead because of her experience in marketing and tourism.

However, Alderwoman Sarah Carter Smith made the motion that the board appoint Furdge to the position and her motion was seconded by Alderwoman Valencia Hall.

The motion passed by a vote of 4-2 with Aldermen Billie Joe Frazier and Felicia Irving both voting “nay.”

Furdge said as a project manager and coordinator for 19 years and counting, she has been given the task of promoting, marketing, organizing and planning hundreds of events as well as managing and overseeing massive budgets, obtaining skills that will help her better serve on the NCPC.