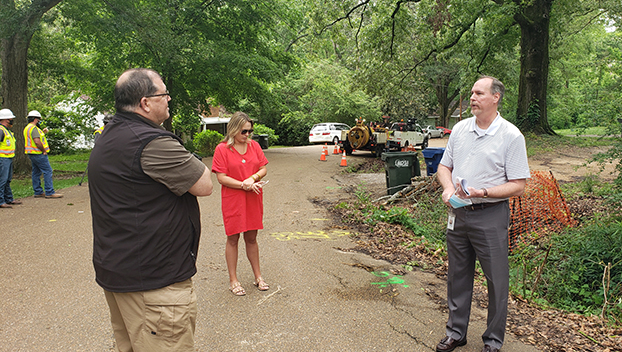 NATCHEZ — Atmos Energy is investing millions of dollars to replace gas pipes for some Natchez residents, company officials said Wednesday as they broke ground on a project on Oakland Drive.

Construction Manager Monty McCaleb said the Oakland Drive and Morgan Avenue project alone would impact approximately 110 Atmos customers as the company replaces 5,000 feet of old metal pipes with a modern and more durable plastic material, which is an approximately $1.1 million capital investment in the neighborhood located off of Morgantown Road.

The plastic pipes would not get corroded as the metal pipes placed decades ago would, he said, adding the upgrade increases the integrity of the gas line and helps avoid future leaks.

“I think this piping dates back to the 50s,” McCaleb said. “Natchez is actually one of the older gas systems in the state. I remember one time touring one of the Antebellum homes and they were talking about how it was piped for gas when they built it in the 1850s. … There has been a gas system here in Natchez for many years. Some of our oldest files were pipe replacement projects dating back to the 1920s.”

The company is investing approximately $4 million in other pipe replacement projects throughout the city, including at Washington and Whitney roads and Green, Merrill, Oak and Purnell streets, McCaleb said.

“We looked at the age and leak history to try and identify a project,” he said.

Each project, depending on size and weather, could take anywhere from a few weeks to two or three months from start to finish.

The project will not cost customers anything and should not interrupt their service until the day they are tied into the new line, at which time their gas will be cut off and turned back on the same day.

Each project would be done consecutively so that resources are not exhausted on multiple projects at once, he said.

The piping upgrade is the company’s latest effort to make the City of Natchez “a safer and better place to live, work and raise a family,” said Robert Morgan II, spokesperson for Atmos.

“This millions of dollars of capital investment is our way of making sure our infrastructure is modern and top-notch and safe for men and women of Natchez and Adams County,” he said.