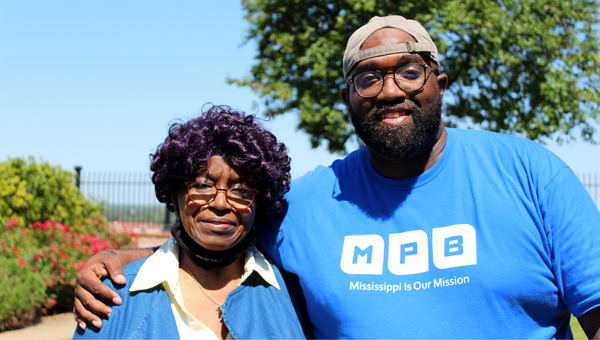 Ann Chatman and her grandson Java Chatman stand togehter on the bluff close to where The Dart landed Friday. Java is a producer for Mississippi Public Broadcasting and is a DJ. While he is a Jackson native, Natchez is a second home because of family like his grandmother. (Hunter Cloud The Natchez Democrat)

NATCHEZ — Java Chatman produced an episode of “The Gestalt Gardner” hosted by Felder Rushing for the Mississippi Public Broadcasting on The Bluff close to where the dart landed Friday morning.

Chatman was born and raised in Jackson, but his second home is in Natchez. His father’s family is from Natchez. His grandmother Ann Chatman watched her grandson produce the show as she sat in the shade. He said coming back to Natchez is like returning to a second home.

“Natchez is like a home away from home because I have spent so many summers here,” Chatman said. “I have spent so much time here with family. Every time I come into Natchez all of these memories are triggered. It is always a nice feeling to come home to my second home.”

Ann has 19 other siblings, and those siblings branched out with their own families. The result is a lot of cousins, too many to count, Java said. He can never date anybody from Natchez because of it.

Memories from his childhood summers in Natchez are in the Countryside filled with cookouts, fireworks and cousins.

“There is just always a Natchez connection,” Chatman said.

He said his favorite part of Natchez is the Bluff because it overlooks the mighty Mississippi. He will travel up the river to Vicksburg to host another Gestalt Gardner show Saturday.

Java is a disk jockey when he is not working as a producer for Mississippi Public Broadcasting. His DJ name is DJ Java, and he uses his talents to celebrate birthdays of relatives like his grandmother. If he could only use one song to DJ with the rest of his life, it would be “Sky’s the limit” by Notorious B.I.G.

“It is kind of corny. I’m trying to think of something cool to say but I can’t,” Chatman said. “It is basically one of those rap songs where it talks about the sky is the limit, do what you can do.”