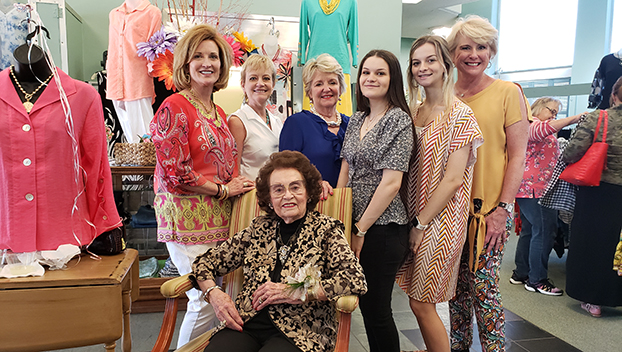 NATCHEZ — Josie Craig celebrated her 102nd birthday on Friday at her favorite place to shop, Katie’s Ladies Apparel on Liberty Road in Natchez.

She has been a faithful shopper at Katie’s Ladies since the store opened more than 27 years ago.

“I buy all of my clothes here,” Craig said.

Not only does she shop there, but Craig also models the clothes for the store’s fashion shows and advertising.

“I have been doing it since they asked me (more than 20 years ago),” Craig said of the fashion shows. “I haven’t stopped.”

“She likes styling and dressing up. She picks out her clothes and the jewelry to match,” McCarstle said.

Craig said she has enough jewelry to “match any outfit that anyone wears.”

Craig said does not feel like she is 102 years old. She is a picture of good health.

“I don’t take medicine,” she said.

She drives herself into town in her black BMW from her house between Ferriday and Lake St. John to shop, buy groceries and socialize almost every day.

Craig said she plays card games with her girlfriends Joyce Smith and Mary Ann King every Thursday. Craig also does floral arrangements and has won a drawer full of large ribbons for her designs, she said.

“You knew if Mrs. Josie was in the flower show you wouldn’t have a chance at winning because she was going to win,” McCarstle said.

Craig is also a long-time member of the Ferriday Garden Club and Natchez Garden Club.

She has been a member of the Natchez Garden Club for approximately 75 years, she said.

Approximately 50 people showed up for Craig’s birthday party Friday at Katie’s Ladies, including her friends from the Natchez and Ferriday Garden Club, her church, and her son Wade Craig and grandson, Wyatt Craig. Craig said the party was a pleasant surprise to her.

“I didn’t know they were going to do this until last week when (McCarstle) called and told me they were,” she said. “I enjoyed it. It was a large crowd.”