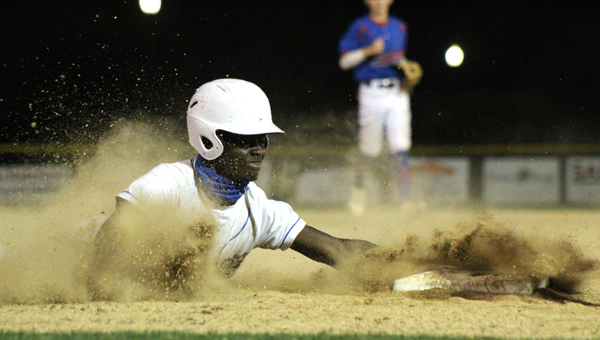 Trevon Henry steals third base in the Bulldog's first round game with Pascagoula. Natchez exited the playoffs in the second round. (Hunter Cloud | The Natchez Democrat)

PASCAGOULA — For the second straight game, the Natchez High School Bulldogs could not muster nearly enough offense to stay with the Pascagoula High School Panthers while their pitching and defense also let them down.

An eight-run barrage by Pascagoula in the bottom of the second inning led to the Panthers defeating Natchez High 12-0 in five innings last Friday night and in the process sweeping the Bulldogs two games to none in the second round of the 2021 MHSAA Class 5A South State Playoffs.

Pascagoula freshman Griffin Wells held Natchez High to just three hits, struck out seven, walked only one and hit two batters in five innings to earn the win on the mound.

Devin Winchester had a one-out single for the Bulldogs in the top of the first inning, but that was one of the few bright spots for the visiting Region 6-5A champions. Dekaron McGruder had a double and Zehlin Cornett had a single.

The Panthers scored one run in the bottom of the first inning before scoring their eight runs just one inning later for a commanding 9-0 advantage.

“We had a couple of walks. They got a hit here and there. That opened the game up. Against a good team like that, you can’t give up any walks,” Smith said.

Wells helped his own cause and led the Panthers’ 12-hit attack by going 2-for-2 with a double and two runs batted in. Sean Smith went 2-for-3 with a double, one RBI and two runs scored. Keilon Parnell had a triple and Francisco Solivan had a double.

Trylon Minor lasted two and two-thirds inning, allowing four runs, all of them earned, on six hits and three walks with just one strikeout.

“Overall, as a coach, I was wanting to win the (state) championship. That’s the ultimate goal. We didn’t reach that goal, but I was proud of how we fought all season,” Smith said.

Smith said he was proud of the season the Bulldogs had.

Natchez High finished its season with an overall record of 12-11. Pascagoula will take on Region 7-5A champion Pearl River Central High School (28-2) in the Class 5A South State Semifinals later this week.

Lake near Monticello reopening for fishing after four years…