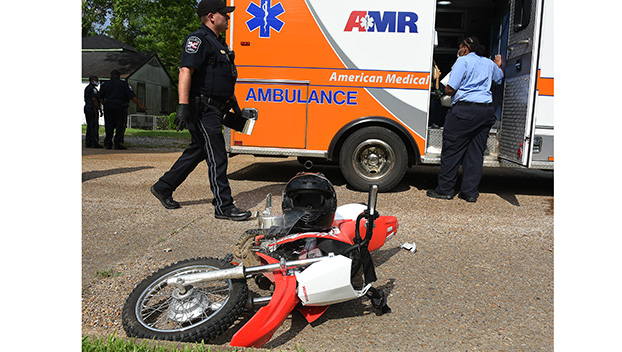 A dirt bike lays on the ground at the scene of an accident Monday at the intersection of Lasalle Street and Gayosa Avenue. Two children, 8 and 11 years old, were injured. (Ben Hillyer | The Natchez Democrat)

Natchez Police Chief Joseph Daughtry said the children, ages 8 and 11 years old, were traveling North on Lasalle Street on a single dirt bike and were struck by a car going West on Gayosa Avenue.

Daughtry said witnesses on scene told officers the children went through a stop sign on Lasalle Street without stopping and the driver of the car could not stop in time.

The children were transported by ambulance to Merit Health Natchez for a medical evaluation.

“Our prayer is that they will be OK,” Daughtry said. “They do have some leg injuries. The sheriff’s office came out to assist us and we want to thank them for that. Anytime children are involved, it’s all hands on deck.”