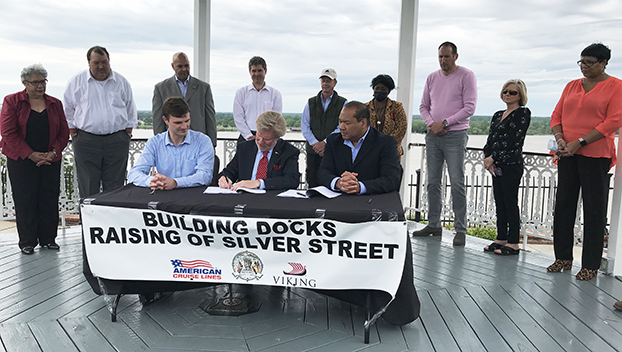 NATCHEZ — On Tuesday, Natchez Mayor Dan Gibson signed leases with American Cruise Lines and Viking USA for land they will use to build their new docks.

“We are doing something historic today,” Gibson said. “Over the last few months, we have

been negotiating hard to get Viking and American Cruise Lines both signed on to a long-term lease and a commitment to build docks at Natchez Under the Hill.”

The Board of Aldermen approved both leases unanimously during their Tuesday meeting.

“We’re very proud to be here and proud to be a part of this,” said Charles Robertson, CEO of American Cruise Lines.

“We’ve been part of Natchez for about 10 years now and the community has been just phenomenal to us and so we’re very proud to return that in some form through the investment in the dock and this lease. We’re building new ships to come to Natchez and the dock will allow us to spend more time here, do more things and work with more of the community every time we come. We look forward to a bright future.”

Additionally, American Cruise Lines has issued a check to the City of Natchez for $250,000 Tuesday that will contribute to the raising of the south end of Silver Street starting at Magnolia Grill. Viking has agreed follow suit and give another $250,000 to the project, Gibson said.

The heightened road would be able to withstand a cresting point just under 62 feet, which was the record cresting point of the 2011 flood, and will have a sidewalk along the river that will not impede any of the businesses view of the river Under the Hill, Gibson said.

Natchez City Attorney Bryan Callaway said the term of the lease is 20 years with options to extend it beyond that.

Per the terms of the lease, both cruise companies will pay the City of Natchez $2 per passenger on each vessel that docks there.

American Cruise Lines will begin construction of their dock within two years and finish within three years while the city has two years to raise Silver Street.

The design of the dock is subject to further approval by the Natchez preservation and planning commissions and Mississippi Department of Archives and History.

“We are going to begin the design phase for the raising of Silver Street,” Gibson said. “While two years is allowed, we are ambitiously hoping to tackle this project by the beginning of summer next year.”

Gibson said American Cruise Line’s new dock will be built just south of the existing landing and would be open as a public walkway extending out into the water while ships are not loading and unloading.

“It will not be a fishing pier. It will be for viewing purposes only,” he said. “It will have the best view of the Mississippi River of any of the docks.”

Natchez selected to receive $492K from EPA to use…