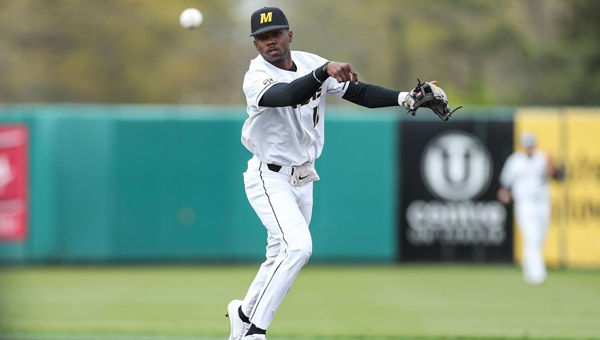 Adams County Christian School alumnus Joshua Day will have a homecoming when he takes the field for Missouri against Mississippi State this weekend.

Day is a junior shortstop and transferred to Missouri from Co-Lin in Wesson. His parents are David and Nia Day and his brother Christian Day is a pitcher for Delta State.

“I am pumped. I’m so ready to get to State,” Day said. “It is wild. I’m going to feel like I’m in a movie. With the fans cheering, they have 10,000 fans a game. My family will be able to come to see me play. I got a lot of family and friends coming, so it will feel good coming back home and playing in front of them so they can support me.”

Day had to make a decision between baseball and basketball his senior year in high school. He chose to play baseball at the college level and let baseball take him as far as he could go.

His freshman year at Copiah-Lincoln Community College, he hit .333 in 45 games and his sophomore year, he batted .267 in 15 games. He said he misses playing basketball, but he had no regrets about choosing baseball.

“I just wanted to do something different,” Day said. “I tried to start something new. Bring black players into baseball. To show them there is something more out there than basketball or football that you could succeed in. I gave it a shot.”

He said it has been fun playing in the SEC and making the leap from Junior College baseball. Missouri is in a rebuilding year and is currently on a nine-game losing streak ahead of their series against Mississippi State.

Day made a top ten play in a game against Kentucky on March 20, 2021. He dove to his right to steal a base hit from the Wildcats on a line drive. His favorite moment in baseball came in his time with Co-Lin when he hit a walk-off grand slam to beat Southwest Community College.

“There was one out, and we had the bases loaded. At that moment, I knew I was going to get a run-in. I just didn’t know how,” Day said. “I had a lot of confidence at the plate that day. I had a lot of success at the plate that day. I was not expecting to hit a home run, but I was trying to get a run in. I was pumped after that. To celebrate with my team was fun. Southwest is a big rival, so it was good to crush their hearts.”

Columbia does not feel big, Day said. It is a college town. He said Mizzou, Tigers, black and gold can be found everywhere in town. Even the ice cream shops are decked out in Mizzou colors, he said.

It has been a fun experience being at Missouri, he said. The University of Missouri is a 10-hour drive from home. He said being that far away from his family is different from his time at Co-Lin.

“It is something you have to get used to,” Day said. “You go from being able to see your family, and then they are 10 hours away. It was different when I was in Junior College. I was able to go home and get home-cooked meals. I got to see my family. I miss them a lot when I’m up here.”