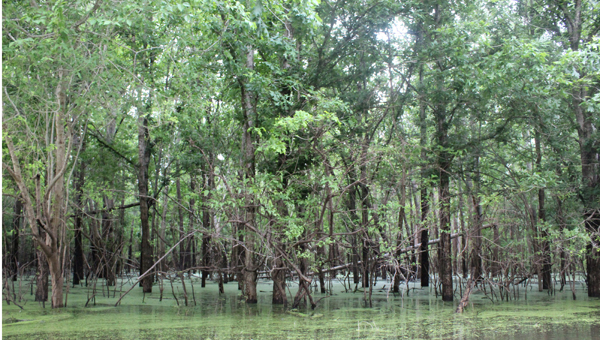 Above is a portion of the “Swamp” at St. Catherine Creek Wildlife Refuge in SIbley. Kent Ozment said the trees there have naturally selected to flood tollerant species during the flooding season. (Hunter Cloud The Natchez Democrat)

Ozment said the river creates a pretty diverse habitat for wildlife and plants. He said the animals are adaptable to the changing water levels.

Mississippi River flooding can have a positive impact on animals, and a detrimental for others. In 2011, there was a big flood. He said a lot of deer and hogs drowned and washed up. As the water level rises, predators such as Alligators prey upon displaced deer and hogs, he said. Hunters also harvest displaced deer.

“Deer who have been displaced for a majority of their life have pretty much decided to not go back to where their mom and dad raised them,” Ozment said. “One of our units at Cocodrie had a huge bump in the number and size of deer that were harvested. Those were displaced at the right time during the hunt and they were harvested. It is the dynamics of the system.”

These same species chase the river’s edge as the water falls out. He said the refuge has an edge effect. In an edge effect, when the border of river and forest meet he said there is a combination of species that are not normally together.

One of these edges is called the “Swamp” where a lot of wildlife activity takes place. The “Swamp” is about four to six miles from the river’s edge when it is not in flood stage. He said photographers and bird watchers come to the wildlife hotspot. He said in the wintertime, the refuge could have close to 50,000 ducks and 24 bald eagles.

Trees have adapted to the flooding at the refuge. He said they were naturally selected for flood-tolerant species. Bald Cypress, Willow and Cottonwoods make up a majority of the trees at St. Catherine.

Last week, several dead alligators could be seen along US 84 near Frogmore plantation. He said in places where wildlife and humans meet there is going to be conflict.

Alligators can be displaced by high waters as they follow the water’s edge. Gators are cold-blooded reptiles and need the sun to warm up. Roads such as US 84 act as a levee and gators will be pushed to those spots.

“When it is cool, Alligators will go to a sunny spot and get up there to warm up,” Ozment said. “When that sunny spot just so happens to be a road. There is a greater chance of impacts with vehicles. They will come out of the shallows and onto a road and soak up (the sun).”

He said when the Mississippi River is in flood stage, 30% of the water is diverted into the Atchafalaya Basin and Red River system. Bayou Cocodrie carries that water down to the Black River. If the Red River is low enough, water will gravity drain out. When the Red River is high, the water has to be pumped.

McGuffee said that rising water could be good for fish because it creates nurseries for young fish to grow.

“In the long run, as long as it is not a drastic up and down in a short period (high water) is actually good for fisheries,” McGuffee said. “It is beneficial. It creates a lot more habitat when that terrestrial ground is flooded. (Fish can eat) a lot of the bugs and insects then.”

Flooded terrestrial ground offers additional grasses and structure as cover for bluegill and bream to hide from predators, he said. When any river system gets backed up, it can actually be beneficial to fish. He said flash floods or drastic falls in water levels could be detrimental to fish during the spawning season.

“If the high water comes and then the water fell out, it would mess up their spawning,” McGuffee said. “If they are not nesters, (drastic water levels) won’t affect them as bad.”

St. Catherine’s Creek Wildlife Refuge sees Alligator Gar take advantage of high water levels. As the water depth drops, their eggs are carried back out into the river and help the Alligator Gar spawn, Ozment said.

United States Fish and Wildlife Service puts wildlife first in their wildlife management, and public use comes in a close second, he said. As flooding deposits debris such as limbs, sediment and trash from up the river, the staff at the wildlife refuge works to clean it up.

The staff at St. Catherine’s Creek chases the water as it leaves to clean up debris and sediment. He said over the years, sedimentation from the river has been difficult to remove.

“If we don’t clean the roads from flood debris, the public can’t use them to access hunting, fishing and photography,” Ozment said. “As it leaves, we will be on the tractor removing trees and debris. We will add gravel where we have had issues. We clean out water control structures and allow the floodwaters to recede, and get the public back to the access they need.”