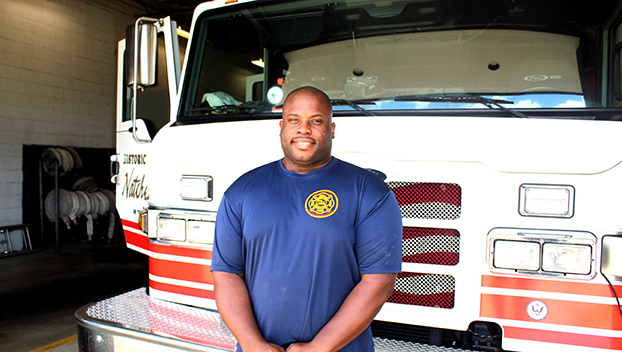 Stokes said in his free time, he writes romantic, chill poems and motivational quotes. His pen name is “Phonzey the Poet,” but his fellow firefighters just call him The Poet.

“It runs in the family,” Stokes said. “It is something I like to do. I like to motivate people to give them something to look forward to. Give them that oomph to keep going.”

Maya Angelo is his favorite writer, he said. As a Natchez native, Stokes has lived much of his life in Natchez. He said in his 20s he lived in Jackson for three years. In Jackson, he worked at O’Reilly’s and Direct Tools before he moved back to Natchez and became a firefighter.

Once, Stokes said he saw a car accident by McLaurin School and he helped an elderly couple out of their car. He was 14 or 15 years old, he said. At that moment, he felt a rush of adrenaline to help them.

Firefighters spend their days performing station duties, he said. They may have inspections or have to wash the fire trucks. Fire calls spark adrenaline different than their daily tasks, he said.

He said you feel the intense heat from the flames when you are wearing a fire suit. This is because fire suits are fire-resistant, not fireproof. Stokes said he has not had any scary moments in his time with the fire department.

Sometimes the firemen play basketball behind the fire station on a basketball goal, he said. They also work out by lifting weights in their weight room. Stokes said he eats pretty good as a firefighter.

“My favorite thing to make is Rotel and taco soup,” Stokes said. “You have people who can cook spaghetti, chili and all sorts of things. I eat pretty good.”