Rebel football planning to work hard over the summer 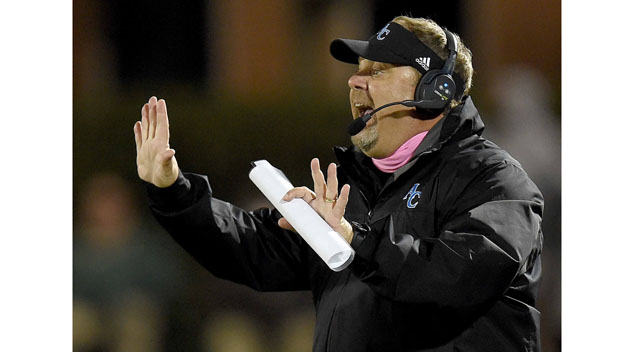 Adams County Christian School head coach David King calls out to his defense at the MAIS Class 5A State Football Championship in Nov. 2020, at Jackson Academy in Jackson. King said his team will work hard over the summer ahead of this upcoming season. (File Photo)

NATCHEZ — The Adams County Christian School Rebels traveled to Oak Forest Academy in Amite, La. on Thursday, May 13 to take on the Yellow Jackets in their annual spring football game. And it was one that ACCS head coach David King would rather forget.

“They beat us like egg whites because we didn’t come over there as prepared as we should’ve been,” King said. “We have several holes to fill from last year’s team. I didn’t do a good job in those 10 practices of getting those holes filled. I didn’t go a good job of preparing the kids who have to fill those holes for the spring game.”

Even though Oak Forest had its way with ACCS, King added, “There is a lot of potential there and the boys played hard.”

As for any positives that King took from the game, he said, “Nobody quit and I didn’t have a heart attack. We’ll look forward to the summer. That’s where we’ll make our mark. Just roll up our sleeves and work hard this summer.”

Coming off a stunning run to the 2020 MAIS Class 5A State Championship game, the Rebels will try to make another long postseason in Class 4A. They will in District 3-4A with only one familiar opponent — St. Aloysius High School, which also dropped down from Class 5A. Their other district opponents will be Clinton Christian Academy, Riverfield Academy, and Tri-County Academy.

King said that the 2021 ACCS Rebels could have another double-digit winning season – which will be nothing unusual going back to his days as head coach at the former Trinity Episcopal Day School.

“We’ve averaged 10 ½ wins a year for 24 years with this coaching staff, so I think we’ll be okay. We just didn’t look it the other day,” King said. “I have complete faith in my coaching staff. Our young men will work hard this summer to overcome my ineptness and we’ll be just fine.”

As for how the 2021 season will be different than last year, King said, “Last year, we weren’t picked in the top 10 and played for the state championship, which seems to be a trend that we like.”

King added that he is not interested in all the preseason hoopla and that he wants his team to “stay out of the drama.”