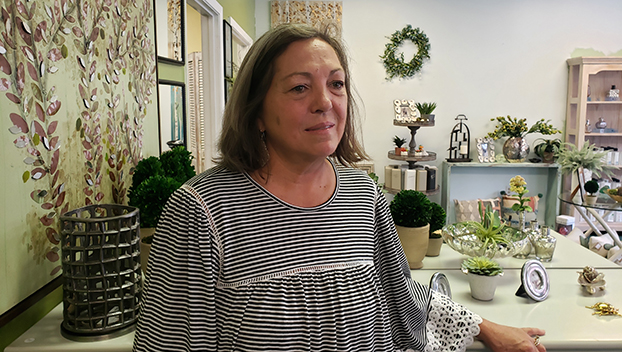 Dianne Kirby has owned and operated Dianne’s Frame Shop for 42 years starting on Franklin Street in 1979. For the past 20 years, her store has been located on John R. Junkin Drive and closed permanently after February ice storm caused extensive damage to the building. Kirby is hosting a close out sale at 624 Franklin St. until the merchandise has sold. (Sabrina Robertson | The Natchez Democrat)

NATCHEZ — Balloons hung outside 624 Franklin St. earlier this week while sounds of laughter and chatter filled the inside of the store.

While it looked like a party, Dianne’s Frame Shop was having a close out sale of all their merchandise to end the business’42-year run.

The merchandise had to be moved from the store location on John R. Junkin Drive, which was badly damaged during an ice storm in February. Water flooded the building from the ceiling and damaged the roof, floor and drywall. The shops framing materials were also ruined, however, much of the merchandise was saved.

As Dianne Kirby’s customers came in and out of the store, some were there to buy and others came just to chat with the owner, wish her well and share memories. Nearly 100 people came through the store Tuesday and more came in every day after.

Kirby’s plan is to stay open until most of the merchandise sells. Daily updates and sales are posted on the shop’s Facebook Page.

It was an emotional time for Kirby and for her friends and customers as she exchanged a few hugs and fought off tears.

“They started lining up outside at 7:30 and we didn’t open until 10,” said Jean Smith-Sanders, who is a close friend to Kirby. “There were people who came in who didn’t buy anything but just showed up to tell her how much they love her and how much they appreciate everything that she has done for them in the 42 years that she has been in business.”

Kirby’s customers and staff are her family, she said.

“I have enjoyed my 42 years and it’s all about my customers,” she said. “They have made my business. I wouldn’t be here if it were not for them … and I couldn’t have done it without my family and staff.”

Diane Laird said Kirby and her husband, Kent Kirby, would always go out of their way to help people.

“She has always helped anyone and everyone. There has never been anyone that she knew or didn’t know that she wouldn’t do something for. I’ve seen her frame pictures for families who’ve lost loved ones and bring it to them for no charge.”

Dianne’s Frame Shop opened 42 years ago on Franklin Street next door to the building the merchandise was moved too for her final farewell. Kirby said she store moved to John R. Junkin Drive approximately 20 years ago.

“This was where we started,” she said. “It’s like we’ve come full circle.”

While her store is closing, Kirby said she is not finished working. It’s not in her nature. She continues to decorate and do independent jobs for friends upon request.

“I’ll still be around if people need me,” she said.