Natchez Bicycle Classic brings in riders from out of town 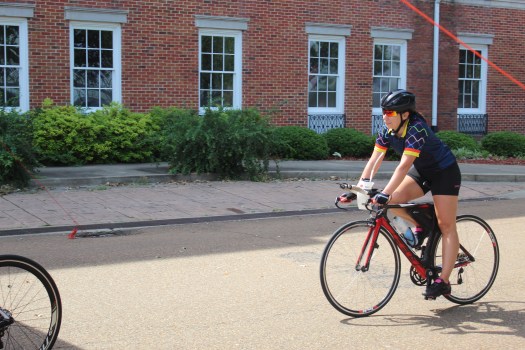 Ashley Ford crosses the finish line on Broadway behind the Natchez Grand Hotel. Ford is from Hattiesburg and was riding alongside her husband Joey Saturday morning. (Hunter Cloud The Natchez Democrat) 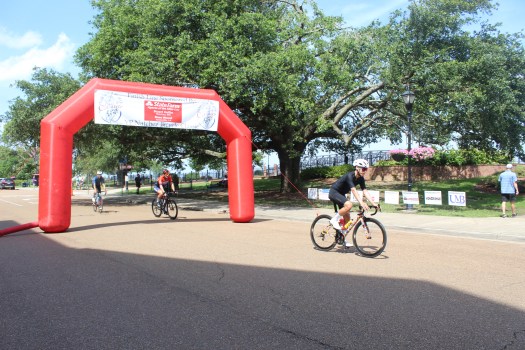 From right, TJ Nyguen, Mark Gagnard and Chris Macaluso race across the finish line. All three riders are from New Orleans. (Hunter Cloud The Natchez Democrat) 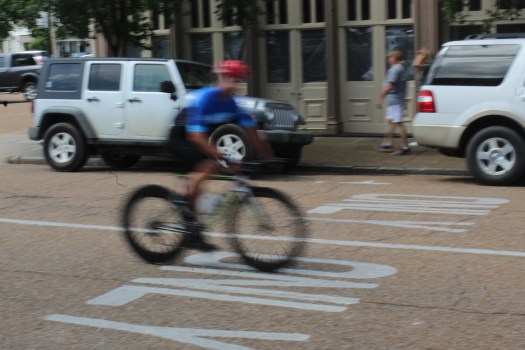 This unidentified cyclist was a blur as he raced down Main Street Saturday morning. (Hunter Cloud The Natchez Democrat)

The second Natchez Bicycle Classic took off down Broadway Street with more than 100 riders Saturday morning. Cyclists embarked on either a 15 mile , 26 mile, 40 mile or 62 mile routes.

Natchez native Kate Lee Laird sat in the shade of the Grand Hotel following her 15 mile ride. She described the feeling of completing the ride.

“My legs are jello,” Laird said.

Cyclists came racing down Main Street and turning right around the corner of Broadway to finish beneath an inflatable arch. Ashley Ford and her husband Joey Ford finished together in matching cycling jerseys.

The couple lives in Hattiesburg and came to Natchez to ride on the bicycle classic. She said it was the first time they rode in the event and had they known about it last year they would have ridden in it then.

Joey said the weather was perfect and the ride was beautiful. Ashley said they had to climb a hill on their way back from the Natchez Trace down Liberty Road

“Going down was fast but coming back you gotta climb it. It pushes you a little bit,” She said. “There is a really pretty property with a white picket fence and moss hanging in the trees. It was gorgeous. It was really serene out there. Not much traffic, it was a good ride.”

Bubba McCabe crossed the finish line to a round of applause as he carried food in tin pans. While live music played a group of three cyclists from New Orleans rounded the corner and raced across the finish line.

Mark Gagnard, Chris Macaluso and TJ Nguyen took a lap around the hotel before coasting to a stop. Nguyen said they raced to the finish line and he beat out his friends. Gagnard said he rode in the bicycle classic last year.

“(”I heard about it ) on the internet,” Gagnard said. “I did the ride last year, it was nice. It was a beautiful ride. We were racing to the end, which made it fun.”

Walking with his bike across the road, Gagnard said “I’m going to go get some jambalaya.”