Spears sets goal for ACCS girls basketball ‘to be competitive’ 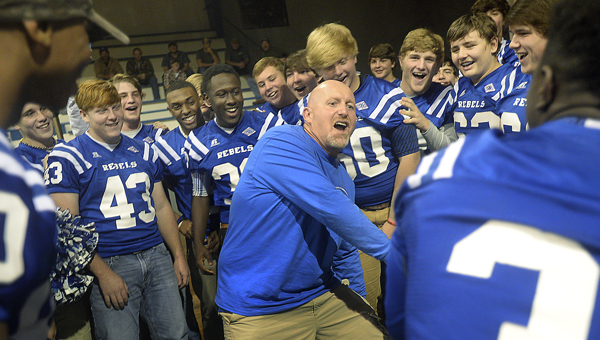 Richy Spears was named the girls basketball coach for ACCS. He has served as a defensive cordinator for the Rebels Football team. (File Photo / The Natchez Democrat)

NATCHEZ — When Natchez native Melanie Hall recently announced she was stepping down as junior varsity and varsity girls’ basketball coach at Adams County Christian School, Richy Spears was chosen to take over the program.

For Spears, it will be the first time coaching a girls’ team since his coaching days at Trinity Episcopal Day School nearly a decade ago.

“I’ve been coaching the boys. They asked me if I’d be interested. I’ve coached girls before, at Trinity and at Bowling Green (School in Franklinton, Louisiana). I’ve done it before,” Spears said. “I was excited to get the opportunity. Even my wife was excited. It’s easier than coaching the boys, on and off the court.”

After having some time to realize that he is now the head coach of the Lady Rebels, Spears said his plans and goals “to be competitive each and every night. Whatever it takes.”

Spears is also an assistant football coach and said he is more of a defensive-minded coach. He said he will bring that mindset to both the JV and varsity girls’ basketball teams.

“Every coach has the same goal. Football-wise, I like to coach defense. When I coach basketball, it’s the same thing,” Spears said.

Spears added that there is indeed pressure to replace a legend in Melanie Hall, who did this for an astonishing 32 years — coaching at her alma mater, Trinity Episcopal, for 14 years and for another 18 years at ACCS.

As for how exciting this opportunity is, Spears said, “It’s always exciting to become (head) coach of a program. That’s how I got my first coaching job – coaching girls at Bowling Green.”

Spears noted that there will be challenges he’s be facing coaching both the JV and varsity Lady Rebels.

“It’s going to be putting in the time. If you’re going to do one, you’ve got to do the other. Put in your system and do it,” Spears said.