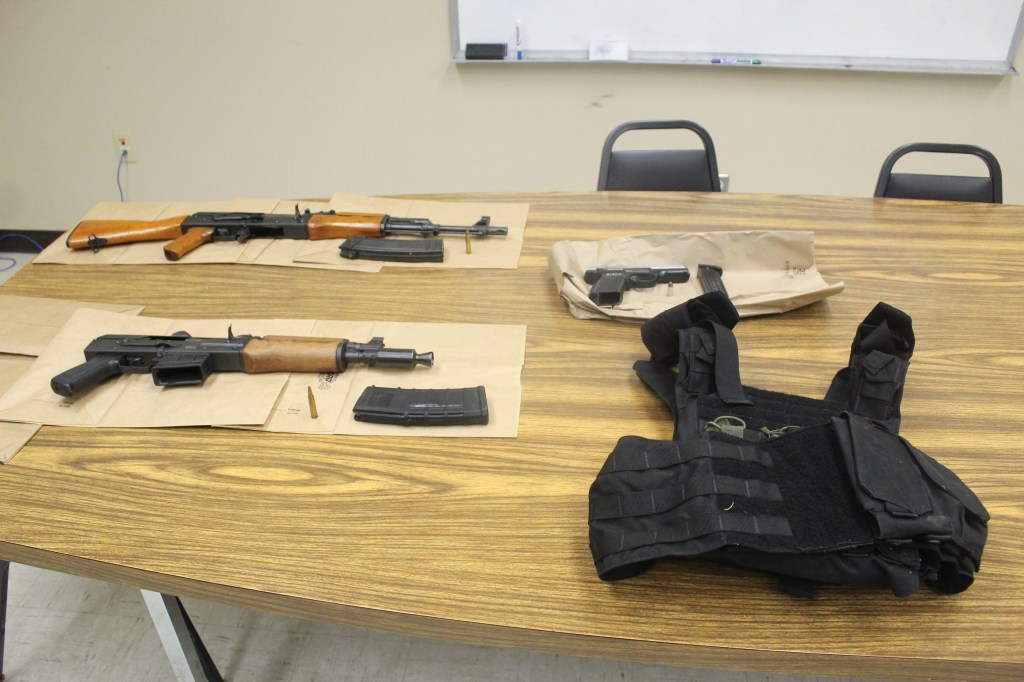 Natchez Police recovered weapons and a ballistic vest from the home. The vest was stolen out of an officer’s personal vehicle. (Hunter Cloud The Natchez Democrat)

NATCHEZ —Natchez Police Department executed a search warrant at 15 Bishop St. in Natchez Thursday morning and came away with a cache of weapons, ammunition and a stolen ballistic vest.

Keldrick Washington, 30, of 15 Bishop St., faces seven felony warrants for convicted felon in possession of a firearm and possession of stolen firearms.

Natchez Police Chief Joseph Daughtry said when officers arrived at the home they heard foot traffic inside. Officers secured the home after a female subject came to the door and told them no one else was there. Daughtry said Washington then tried to exit the home out of a window before realizing police had the home surrounded

Inside, officers found an AK-47 style rifle in plain view and were able to get a search warrant to search the home. Officers recovered three weapons, a substantial amount of ammunition and a ballistic vest, which had been stolen from a Natchez Police officer’s personal vehicle.

“A lot of our officers are tactically trained, and (due to budget cuts) they have purchased their own ballistic vests,” Daughtry said. “I’m thankful we were able to recover the vest. A lot of times criminals will wear them in shootings to protect themselves from being shot.”

One of the AK-style rifles was modified with no stock, he said. All of the weapons will be sent to the crime lab to be processed.

Washington currently faces charges of a convicted felon in possession of a firearm on three counts in addition to his other seven warrants.

The firearms stolen are:

• AK chambered with a .223 caliber cartridge

Daughtry said the Mississippi Department of Corrections was on scene to assist Natchez Police. He said he was glad the department recovered the firearms because they do not want them in the hand of the convicted felon.

Daughtry said he is proud of the investigative work his detectives did in advance on the case. The firearms recovered will be processed to determine whether they have been used in connection to any existing police cases.

“We are working hard at trying to get this criminal element off of the street. We need the public to be patient. A lot of people think we are not working,” Daughtry said. “We are working so much everything is coming together. We can close a lot of cases because we are investigating other cases. Before we put anybody in jail, we want to make sure it is done right.”