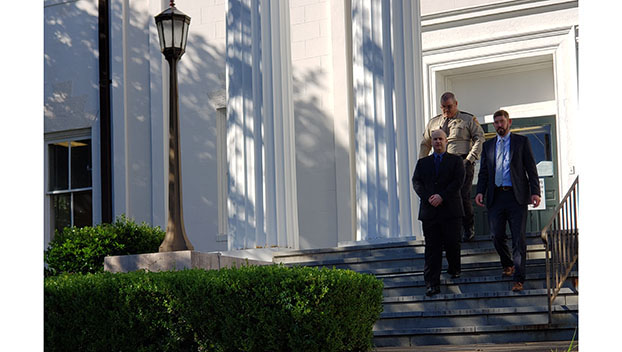 NATCHEZ — The ex-wife of a man accused of murdering two men testified in his trial on Friday.

It was the third day of the trial for Jonathan Beach, 38, who faces two first-degree murder charges stemming from a March 1, 2019 shooting.

Jason Haley, 34, and Troy Whittington, 31, were killed at 15 Quasar St., located just off of U.S. 61 North near Skates Auto Glass & Mini Storage, where Ashley Beach lived with her three children.

Her then husband, Jonathan Beach, was also shot in the right arm and leg during the incident and has pleaded not guilty and is claiming self-defense.

All three men were armed. However, Whittington’s weapon was fully loaded at the end of the shooting and officers said he did not shoot his weapon.

Jonathan Beach has since been held in the Adams County Jail on a $2 million bond. The trial is being held in Adams County Sixth District Circuit Court with Judge Lillie Sanders overseeing the proceedings.

The last of the prosecuting attorney’s witnesses were called Friday morning. Jonathan Beach’s Attorney Zach Jex called Ashley Beach to be his first witness and questioned her for approximately two hours.

Jex asked Ashley Beach whether she had been hiding an affair she was having at the time with Whittington from her husband. Ashley Beach said repeatedly she never had an affair.

Jex asked Sanders if he could treat Ashley Beach as a hostile witness and then proceeded to ask leading questions about her alleged affair and plan to ambush Jonathan Beach.

“Some cutie kept me up all night,” Ashley Beach said, reading a text she had sent to Whittington. In another instance, Ashley Beach texted, “I had to shut the kids up this morning. They were going to tell their dad I picked me out a new husband.”

Ashley Beach said she and Whittington kissed once, but never had sex.

“We were good friends. We laughed and joked and cut up about a lot of things,” she said. “We joked about going on a vacation one time.”

Jex also asked Ashley Beach if Whittington ever threatened Jonathan Beach while referencing a text message conversation where she tells Whittington “don’t get into trouble” after Whittington texts her he would “sink his canoe.”

Jex said Ashley Beach was “making Jonathan out to be a monster” to her friends, particularly to Whittington.

On March 1, 2019, Ashley Beach said she and her fellow volunteers with the Adams County Fire Service were undecorating a float they used in the Krewe of Phoenix Mardi-Gras Parade earlier that night when they found a camera hidden in the rafters of her front porch.

Ashley Beach said she believed the camera was put there by Jonathan Beach without her knowledge.

Shortly after, Whittington texted Ashley Beach and said “don’t let him know that you know” and later texted “on my way” and she replied, “thank God.”

Ashley Beach said she was instructed by sheriff deputies to have no contact with her husband and not to tell Jonathan Beach about the camera and said Whittington was advising her to do the same thing law enforcement told her to do.

Ashley Beach and Jonathan Beach had originally planned for him to pick up his two sons but the children decided they didn’t want to go, Billie Haley said. After they spotted the camera, Ashley Beach cut off communication with Jonathan Beach, she said.

Billie Haley said “it wasn’t normal” to hide cameras at someone’s house without their knowledge and they were scared. When Jonathan Beach came to the house later that evening, they told the kids to go into Ashley Beach’s bedroom and turned off the lights in the house and locked the doors hoping he would go away, she said.

She and Ashley Beach barricaded themselves in the bedroom with the children when Jonathan Beach entered the house, she said.

Billie Haley said she heard Jonathan Beach say multiple times he was going to speak to his wife and then a “huge boom, like a cannon going off, a thud, then another huge boom.”