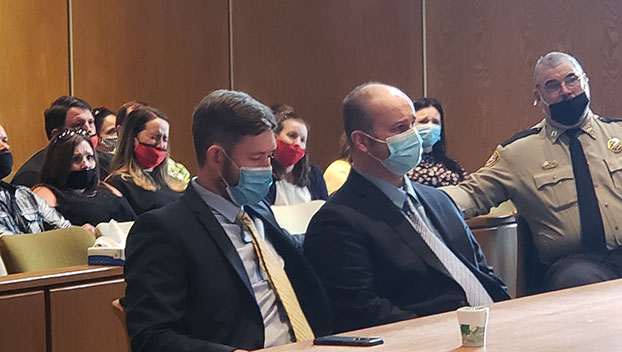 From left, attorney Zach Jex looks down and pats Jonathan Beach’s back while Beach learns that he is found “not guilty” after being held for two years in the Adams County Jail in connection with a 2019 double homicide. (Sabrina Robertson | The Natchez Democrat)

NATCHEZ — An Adams County man tried for two counts of first degree murder this week left the courtroom a free man on Saturday.

An Adams County jury found him “not guilty” of all charges in Sixth District Circuit Court Saturday with Judge Lillie Sanders overseeing the proceedings.

The announcement of the verdict was followed by the sound of sobbing from both sides of the courtroom. The courtroom was full with an audience of approximately 50 people, excluding the jury and courtroom personnel.

When Sanders announced Jonathan Beach was “free to go,” half of the audience in the courtroom cheered.

Jonathan Beach has been held at the Adams County Jail for the past two years on a $2 million bond. He was also injured during an exchange of gunfire during the incident in 2019. He said it was self-defense.

In his closing argument, Austin Frye, assistant district attorney of Greenville, said the evidence pointed to Jonathan Beach as the aggressor in the case. Frye said each witness — including Ashley Beach; Jason Haley’s widow, Billie Haley; and Jonathan Beach’s 13-year-old son, Samuel — testified to hearing Jonathan Beach’s gun go off first as they were barricading themselves in Ashley Beach’s bedroom.

“I can’t imagine anything harder than having to face your own father,” Frye said of Samuel Beach’s testimony. “When asked why, he said ‘I swore to tell the truth.’ You all heard the truth. Jonathan Beach shot first. Jonathan Beach was the aggressor.”

The defense argued that Ashley Beach instigated the confrontation in 2019 because of an alleged affair she had with Whittington.

Jonathan Beach’s attorney Zach Jex said Ashley Beach and Whittington exchanged over 2,000 texts in February 2019, including many with sexual implications. However, Ashley Beach denied ever having an affair.

In his closing argument, Jex pointed to evidence submitted by both the prosecution and defense as well as witness testimony to make his case that the state did not disprove Beach’s self-defense claim.

“It is not Jonathan’s job to prove his innocence,” Jex said. “It’s the state’s job to prove him guilty and they failed miserably. There is not a single shred of evidence that says Jonathan planned to kill Jason and Troy.”

Jex referenced videos of Billie Haley and Ashley Beach talking the night of the incident and pointed to them saying there were “guns in the closet” and “we had it all planned” in hushed voices. Ashley Beach and Billie Haley said they couldn’t make out what was said in the videos.

Jex also pointed to pieces of Ashley Beach’s and Billie Haley’s testimony where they contradicted each other, particularly when Billie Haley testified that Ashley Beach was receiving phone alerts that Jonathan Beach was near when Ashley Beach said she turned off her phone.

Both Billie Haley and Ashley Beach also testified that the sheriff’s office told them not to contact Jonathan Beach. However, deputy Ashley Bennett said earlier in the trial that he told them to avoid conflict with Jonathan Beach but never said they couldn’t contact him.

In the end, it was up to the jury to see through contradictions, determine the difference between lies and mistakes and ascertain the facts of the case.

After three hours of deliberation, they reached a verdict of “not guilty.”

The trial started Wednesday after jury selection on Tuesday. After a trial lasting four days, Sanders said this was the only case in her entire career as a judge that she has ever heard a verdict on a Saturday.