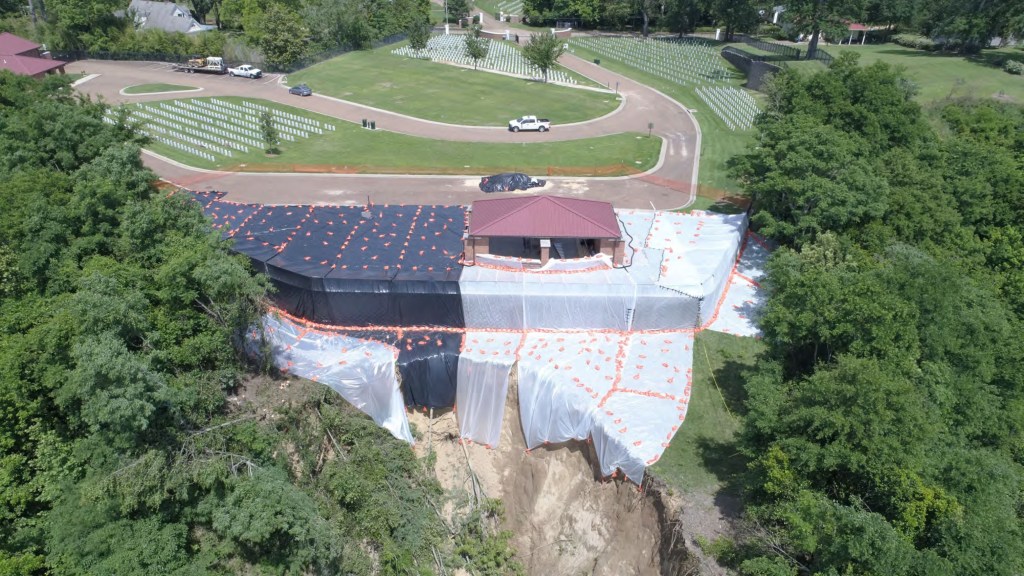 The National Cemetery Administration and the U.S. Army Corps of Engineers have installed a temporary fix at the site of erosion at the Natchez National Cemetery. Natchez Mayor Dan Gibson announced this weeks federal funds have been secured for erosion control efforts. Contracts for that work will be awarded as soon as July and work should start soon after. (Submitted photo)

“The National Cemetery Administration and the U.S. Army Corps of Engineers have been working together to engineer a long-term bluff stabilization project at Natchez National Cemetery,” Gibson said.

“Due to unprecedented rainfall this spring, the Corps of Engineers recently completed temporary mitigation efforts to reduce the risk of significant erosion along the bluff,” he said. “Both organizations expect the award of a construction contract for the bluff stabilization project in mid-July.”

Gibson said the project will cost millions of dollars to complete, “but the federal government is on top of it.”

Gibson said no gravesites have been impacted by the erosion, and none are located near the area of the erosion. Tarps and sandbags have been placed along the bluff to direct rainfall toward the city’s storm water drainage system.

“This should help significantly to reduce water soaking into the soil at the bluff’s edge,” he said.

In addition, the committal shelter along the bluff has been closed. Interments at the cemetery continue and committal services will be held in a temporary shelter elsewhere in the National Cemetery.

“We are very to grateful Melissa Decker, senior advisor at the National Cemetery Association, and to all who have dedicated the time and resources to protect this sacred ground,” Gibson said.