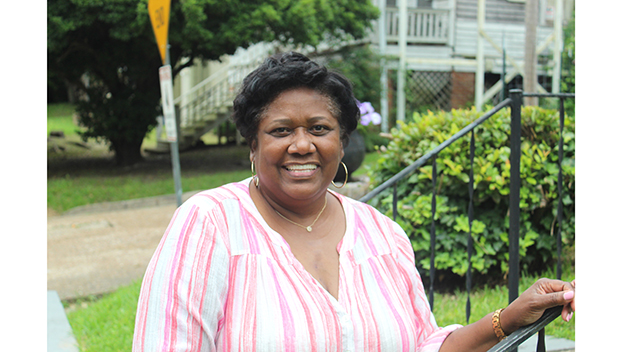 NATCHEZ — Gladys James had just driven into town when she stopped outside her sister-in-law’s home at 501 B Street, close to where The Dart landed Friday.

She is originally from Bernice in Northwest Louisiana, but her husband James is from Natchez. They love to travel, but they also love Natchez.

“I fell in love with the trees, the history, and it is so beautiful,” James said. “I love the Mississippi River. We come as often as we can. We always have a good time walking down by the river.”

Gladys found her husband in Natchez about four years ago. They met at a super bowl party, she said. When the couple retires, they plan to move to Natchez rather than visiting two or three times a year, she said.

Currently, she is a director for Catholic Charities in Fort Bend County, Texas. She has worked in non-profits since college. She said she earned a degree in Early Education and Child Development. After completing her student teaching, she said she decided teaching was not for her.

Instead, she worked for the YMCA in Houston for 30 years, 20 of those years as an executive. Early on in her career, she worked as a pre-kindergarten teacher before serving as a director.

“I like working for a faith-based organization. The Y was a great career builder,” James said. “Before you know it, you have been there 32 years. I worked for four different CEOs. I needed a change. Before I retire, I wanted to try a different non-profit. I work with people with basic needs. I like making a difference.”

Natchez has a beauty that people may not see, she said. The Mississippi River and the Natchez Museum of African American History and Culture are special, she said.

“(The Mississippi River) is so big and so massive, at Southern the river runs behind the campus,” James said. “I have always just loved how it can take you anywhere. The black history museum is absolutely one of the best-kept secrets as well.”