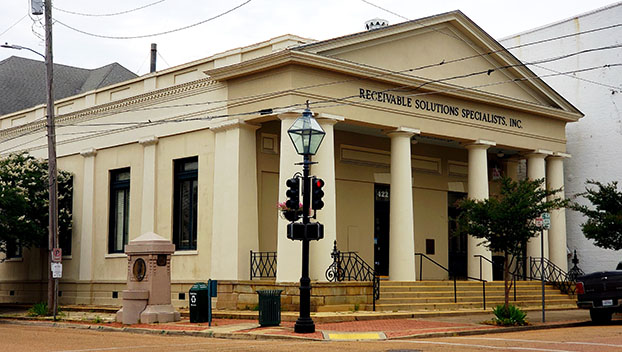 Marty and Cathy Buckman of Atlanta, Georgia, told the Natchez Mayor and Board of Aldermen last week of their plans to purchase the former bank at 422 Main St. and turn it into a bar and restaurant. (Sabrina Robertson | The Natchez Democrat)

NATCHEZ — The Natchez Mayor and Board of Aldermen cut legal ties to the old Britton & Koontz bank building at 422 Main St. last week to make way for a new business.

Marty and Cathy Buckman, a couple from Atlanta, Georgia, intend to purchase the building for a new restaurant and bar, they said during a Tuesday meeting of the Natchez Mayor and Board of Aldermen.

According to Marty Buckman and attorney Walter Brown, the City of Natchez had the first right of refusal on the sale of the property, which at one time was used as the city’s welcome center. While the City of Natchez does not own the building, initially the city wanted the option to use it again as a welcome center before the Natchez Visitor Center was built, Buckman said.

Natchez Mayor Dan Gibson and the Board of Aldermen had no objections to the sale of the property to Buckman.

“We’re excited to welcome you to Natchez and about your willingness to invest and open a new business here that will employ 10 to 15 employees,” Gibson said.

“It would bring something new to downtown Natchez. We’re trying to bring something that has a little bit of excitement to it that is a bit different than what we have now that would be an asset to the community,” he said. “We have spoken to the (Historic Natchez Foundation) and they have given us their full support. We’ve pledged not to change anything on the outside or inside but to enhance it.”

City voted to waive their right of refusal so that the couple could proceed with purchasing the building. The motion passed 5-0. Alderwoman Sarah Carter-Smith recused herself from the discussion and vote because her spouse is a realtor involved with the property.