Professional excited to play in home state in Natchez Open 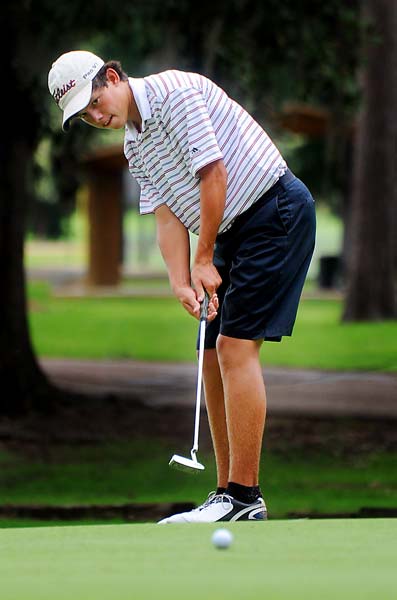 Tristan Hernandez putts during the 2011 Norman Puckett Junior Championship. He won the tournament and is playing in the Natchez Open 10 years later. (File Photo The Natchez Democrat)

NATCHEZ ­— Carthage native Tristan Hernandez is no stranger to Duncan Park Golf Course. He was the 2011 Norman Puckett Junior Champion. He won the tournament when he was 16 and will play in the Natchez Open starting this Friday.

“I’m excited to come back and play in my home state. I don’t get to play in front of my family a lot,” Hernandez said. “It is pretty special. My grandfather (Jimmy Wallace) and I traveled together all over the State of Mississippi when I was playing as a junior.”

Most of the tournaments cost around $1,000 to play in, he said. The Natchez Open had an entrance fee of $300, so he decided he would enter to play in front of his family.

Duncan Park is also a golf course he has had success at before. The golf course has a total yardage of 6,501 yards and plays short, he said. It plays to his strength of driving the ball far.

“If you keep it in play, it is pretty easy,” Hernandez said. “I hit the ball pretty far, so it is easy to hit it around the green. Then it is just chipping after that. On some golf courses, your second shot, you are still hitting your six or seven iron in.”

He said every golfer has courses they like and courses they don’t. Duncan Park is a golf course Hernandez is comfortable with. In the days leading up to the tournament, he will be practicing at Reunion Country Club in Madison before coming to Natchez Wednesday morning, he said.

“I go out and see if they have the pins marked. I play 18 holes, and then I just relax,” Hernandez said. “If a golfer ever tells you he doesn’t feel any nerves, he is lying. There are always nerves somehow, somewhere. It is easy to get over them. You get a couple shots and get into your rhythm. Everybody is nervous somewhere in the first tee shot.”