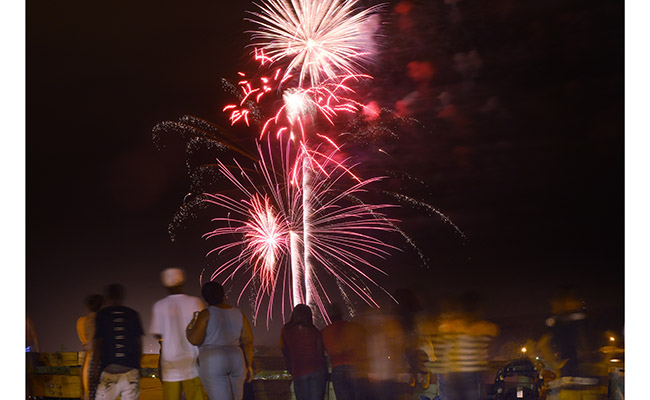 People enjoy the fireworks on the Natchez bluff during a previous Fourth of July celebration. (File photo / The Natchez Democrat)

NATCHEZ — Nothing shows patriotism quite like a massive fireworks display reflecting off of the surface of the Mississippi River.

When Hank Williams Jr. plays and sings the last notes in a July 4 concert on the Natchez bluff, the fireworks on the Mississippi River will be the grand finale, said Sabrina Doré, spokesperson for Miss-Lou Fireworks.

“This is history in the making,” she said, “and because of that we’ve amped it up. … There is going to be a big show jam packed full of large shells that will wow everybody.”

For those watching outside of the concert gate, Doré said she expects the show to start between 9:45 and 10 p.m. on July 4. The best viewing is anywhere on the Vidalia riverfront or Natchez bluff. Fireworks will light up from a barge on the river with help from pyrotechnic Curtis Elkins and the Vidalia Dock & Storage barge service.

However, to make the show possible, sponsors are needed, Doré said.

“So far we’ve raised $12,000 from some of our usual sponsors who do this every year. I am hoping to see some new sponsors, like from our downtown Natchez businesses who benefit from the show while people are out and about to see it. We want people to know they’re apart of this as well.”

Because of the hardships many businesses have faced during the COVID-19 pandemic, Doré said people can give as little as $50 to be a sponsor.

“It takes all of the businesses working together to make this possible,” she said.

Sponsors will be listed on social media as well as in a print advertisement in The Natchez Democrat. Platinum and Gold sponsors who give $1,000 or more will also receive general admission tickets to the Hank Williams Jr. concert.

Sponsors should pledge their donation by June 15 to ensure that enough funds will be raised in time for the show. Sponsorship information can be found online at missloufireworks.com/become-a-sponsor.

For more information, call Doré at 601-807-9995 or email Sabrina@MissLouFireworks.com.