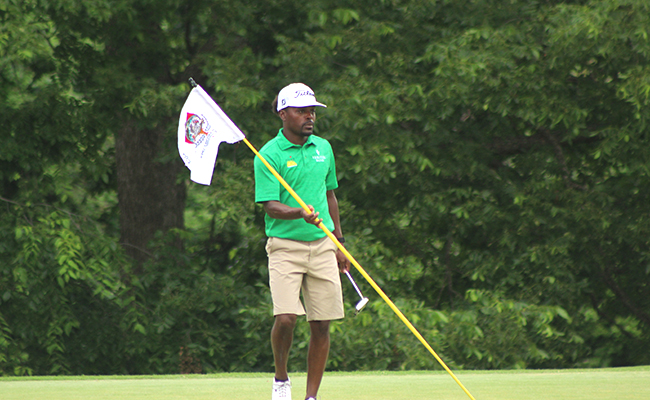 J.P. Thornton holds the flag on the second hole (18) at Duncan Park where The Natchez Open was played on Sunday. Thornton won a junior championship at Duncan Park as a kid and had not returned to Natchez in the 22 years since until this last weekend. (Hunter Cloud The Natchez Democrat)

Apple fritters at the Donut Shop and the Sandbar’s shrimp that were the size of professional golfer J.P. Thornton’s hands are some of his memories of Natchez. Wining a junior championship at Duncan Park is another memory of Thornton’s.

This weekend he returned to Natchez for the first time in 20 years to play in The Natchez Open, he said. The best way for him to describe his return to Natchez is the phrase “full circle,” Thornton said.

“It has been 22 years, and to come back as a professional, play a little bit better than I did as a junior, it is just a full circle,” Thornton said. “It is just humbling, really, to say 22 years later I’m still able to play. I’m blessed and thankful to be able to be back.”

Thornton left Natchez for Memphis in 1999. He won two city championships in Memphis and earned a full scholarship to play golf at Texas Southern University in Houston. His dad relocated to Houston from Natchez and Thornton stayed in Houston from 2007 to 2011. In Houston, Thornton worked in the golf industry as a coach and caddie.

In 2011, he walked away from the game of golf, and in 2014, he made his return to playing golf. In 2017, he started working for Taylor Made as a club-fitter and caddying again.
Last year, he became an instructor at Top Golf, but COVID hit and left him furloughed so his wife Renell convinced him to play professionally, and follows him on the golf course.
“It is a blessing. She is my boo, she is my support system,” Thornton said. “She is everything for me. She caddies for me. She keeps me motivated even when I have bad rounds. I just thank God for her every day.”
He took his savings and won his second professional event and his career took off from there. Veritex Bank in Dallas sponsored him, so he was able to play professional golf full time.
“It is faith walking for the most part,” Thornton said. “I was pretty much at the right place at the right time. Playing good golf and some people took notice. It was a blessing. Unfortunately, the pandemic happened but it was more of a blessing in disguise for me.”