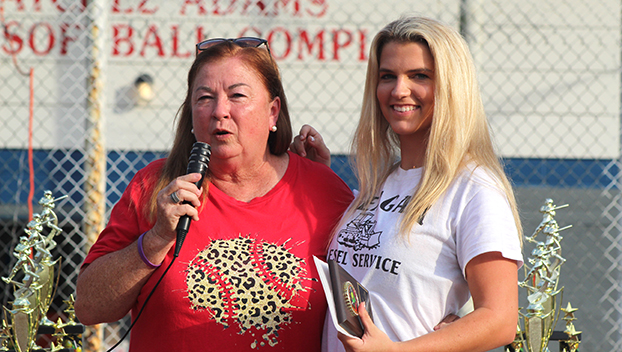 From left, Belinda Brashier awards Drue Boyd with a scholarship in honor of Brashier's late husband Gene. He died in 2019 and was a coach and umpire in the Natchez Adams Youth Softball League. (Hunter Cloud The Natchez Democrat)

Natchez Adams Youth Softball League closed their season with a ceremony to hand out awards to players. Two scholarships were given out to two seniors in the league.

One scholarship is named after Riana Flynn, a former player in the league who died in a car wreck in 2002. Pitcher Jaidyn Flowers was awarded the Riana Flynn scholarship.

She is a Natchez High School graduate and plans to attend Oklahoma State University in Stillwater, Oklahoma. Her grandmother Brenda Honeycutt accepted the award on her behalf because Flowers was out of town.

“I just want to thank y’all,” Honeycutt said. “It is sad because she is my last grandbaby who will be playing ball. Jaidyn started playing tee-ball here in Natchez. She will be playing in the tournament team, and she will be trying out for Oklahoma State University. Thank y’all so much.”

Flowers will study psychology and language at Oklahoma State.

Belinda Brashier awarded a scholarship named in honor of her late husband Gene Brashier, who died in 2019. She said her husband once took time to coach the scholarship winner Drue Boyd in the middle of a game.

Boyd said she had played softball her whole life and started at the Natchez Adams Softball league playing Tee-Ball. She said she had many memories at the softball complex next to the Natchez high school football stadium.

Her sisters and mom all participated in youth softball in Natchez. She said she grew up playing sports with her sisters in the yard. Sports have been her life.

Southwest Mississippi Community College in Summit is the next stop for Boyd. She plans to become a dental hygienist, and she had an opportunity to play soccer at Southwest. She said she was thankful to win the scholarship.

“It’s a good feeling to be recognized as a scholarship recipient,” Boyd said. “I’m very thankful to even have the opportunity to get that. It means a lot because Mrs. Belinda has meant a lot to me. She has always helped me.”