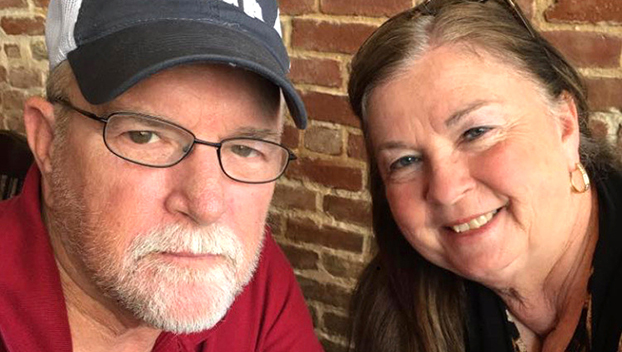 At left, Gene Brashier and his wife Belinda Brashier who he coached with for many years. Gene died in 2019. (Submitted Photo)

Gene Brashier spent much of his time coaching and umpiring in the Natchez-Adams Softball League.

He started out by coaching a tee-ball team at Duncan Park. This was before the golf course was expanded there in 1991, his widow Belinda Brashier said.

After he died in 2019, one of the fields at the Softball complex beside the Natchez High School football stadium was named after him. A red maple tree has been planted in his honor and the league awards a scholarship in his honor. She said he did not want credit for anything.

“One of the greatest honors anyone could have given Gene was to name a field after him,” Brashier said. “He put so much of his time trying to prepare a place for his girls to play ball.”

Described as a tough coach, he would make his kids run to the outfield fence if they made a mistake in practice. He also took the time to teach and coach players as an umpire.

“Gene always wanted to help the girl who was not always the most talented, but the one he knew he could make a ballplayer,” Belinda said.

It was this approach to coaching, which lead to success as he won several state titles. She said all he ever cared about was making sure girls had a place to play softball and make friends. She still watches the youth softball games.

“I still come out. I like to come out because you get that reward seeing the kids learn and make friends,” Belinda said. “Those friendships last forever.”

Gene was her coaching buddy and husband. She said the youth softball league was something they did as a team and as a family. His presence is still felt at the park, she said.

“I’m so proud when I come back and see his name on the field,” Belinda said. “It brings me back to my happy place.”