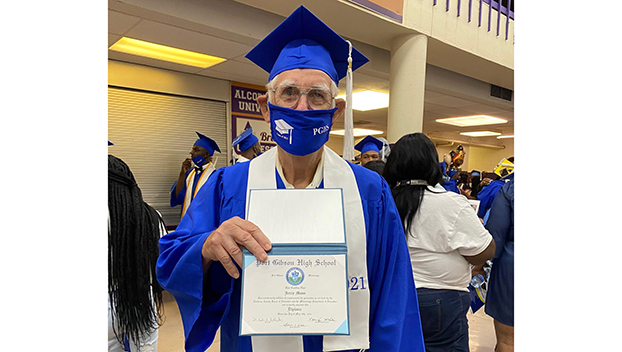 U.S. veteran Jerry Moon, 84, received his high school diploma on May 28 at a commencement ceremony at Alcorn State University in Lorma. Moon’s diploma was more than 60 years late due to a paperwork error. (submitted photo)

LORMAN — While many graduates feel as though they’ve waited a long time to finally walk across the stage in their cap and gown, Jerry Moon has waited more than 60 years to receive his high school diploma.

Moon, who turned 84 on May 1, finally received his diploma on May 28 at a commencement ceremony at Alcorn State University in Lorman — more than sixty years late through no fault of his own. Moon said he enlisted in the U.S. army while he was attending Port Gibson High School and served in the 11th Airborne Division in Europe.

He took his GED exam while stationed in Augsburg, Germany, and passed it. While he should have received his certificate on the base, it was mailed to his home in Port Gibson and postmarked one day after he boarded a ship back to the United States to be discharged on April 9, 1958. The letter didn’t show up in the mailbox until October.

Shortly after, Moon said he took the certificate to his principal at Port Gibson High School who told him that it lacked a signature from his army commander that it needed for him to receive his diploma. Unfortunately, Moon was promoted to different duties during his service and had no idea who that commander was.

Moon was told by his outranking officers he had done a “top notch job” in the service and recalled  how he broke rules to fix a shortage of army blankets and sheets on the base, which was fine as long as he didn’t get caught, he said.

In the 1960s, he and his late wife, Julia, moved to Natchez where he worked at the former Armstrong Tire. Moon said he left the letter from the army containing his GED certificate with his mother during the move and never remembered her giving it back to him, which she thought she had.

It wasn’t until after his mother died in 1994 and his father died in 1997 that Moon found the letter in a chest filled with his mother’s treasured belongings. After he fought a long battle with cancer, he started trying again to get the certificate signed. The diploma dilemma led him on a wild goose chase.

Moon said he first tried making phone calls to various veterans services and kept getting referred from one person to another who couldn’t help him. At one point, he sent a letter to U.S. Sen. Cindy Hyde-Smith’s office asking for help. He eventually went to the U.S. Veterans Affairs Department in Jackson, where laborious hours were spent on a computer trying to get the credentials he needed to finally graduate.

When he turned 83, Moon said his wife could tell how tiresome the effort to get his diploma was and at that point in life it wouldn’t do him much good. He would not go to college at his age. She told him it was time to let it go.

“It wasn’t about the money,” he said. He simply wanted the mark of achievement that he had earned so many years ago.

Moon said his wife died on Jan. 20. At that point, he was ready to give up. Last month, he sat beside a photograph of her talking to her, as he often did.

Less than an hour after him saying this, the phone rang and it was the Port Gibson High School principal telling him he needed to collect his cap and gown.

“I was just so excited,” he said. “The only thing I regret about it is my wife wouldn’t be able to see me. She didn’t think I was ever going to see my diploma. She was so involved. She wanted me to get it. … I know there is no money or value in it. I’m just getting what I should have had in 1958. If I would have had it back then, my life would have been a lot different. God had a hand in that phone ringing at that time. I got the message.”