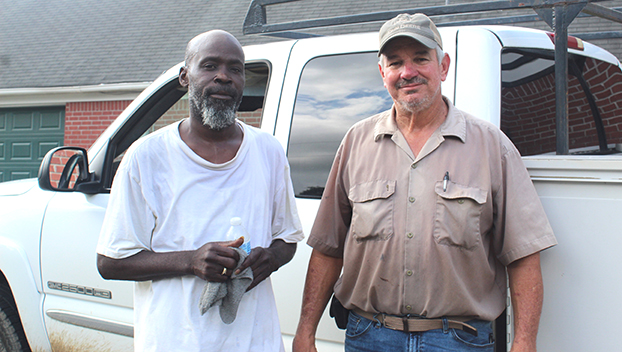 At left, Henry Smith and Anthony Townsend clean up after working on a pool for Townsend’s business Custom Pools. They were cleaning a pool on Thistledown Lane close to where The Dart landed on Friday. (Hunter Cloud The Natchez Democrat)

Anthony Townsend and Henry Smith were cleaning a pool on Thistledown Lane in Natchez, close to where The Dart landed Friday morning.

Since 2008, Townsend said he has owned his own business Custom Pools. Smith said he started working with him about 14 years ago. His daughter was a newborn then. He uses her age to figure out when he began work with Townsend.

He said there is a lot of problem-solving when working on a pool.

“It’s just as much mental work as it is physical work,” Smith said.

One small part or problem can shut down a job site. During The Dart, a piece of equipment broke, which halted their progress on cleaning the pool.

He said Overby started the business in 1971 when he was working nights at Armstrong Tire. In 1975, Townsend graduated from Thomas Jefferson high school. He said it was a private school in Natchez, and it closed in 1977.

“I went to Co-Lin for a couple of years. I didn’t major in anything. I was working and going to school at night,” Townsend said. “I enjoyed it. It wasn’t bad.”

Townsend now lives in Ridgecrest. He said he moved there about 20 years ago when he married a girl who already had two kids in school.

He does not ever plan on leaving the Miss-Lou area because he knows “everybody here,” he said. When he is not building or cleaning pools, he likes to go to his hunting camp in Church Hill, he said.

“I just like to go to the camp,” Overby said. “I pretty much do it for my children and grandchildren now. I enjoy the work part of hunting. The bush hogging and the planting (of food plots).”