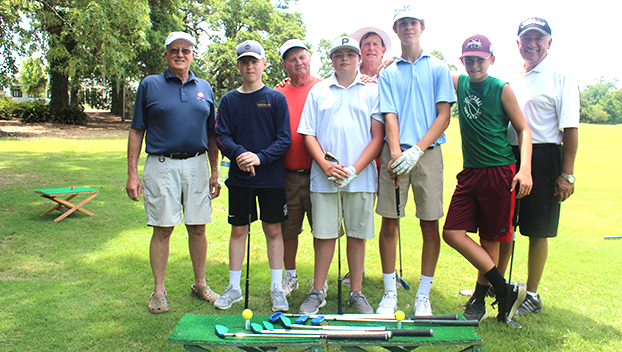 Opening day of the Norman Puckett Junior Golf Clinic was full of excitement for both player and coach. Khater Salomon drove up from New Orleans to teach juniors his concept of turn2blue.

Adams County Christian School golfer Samuel Merriett said he has already played golf for about 6 months. He found out about the junior clinic from a friend and saw an opportunity to get better at the game.

“It’s been fun I have learned a lot I have learned some great tips from some great coaches,” Merriett said. “It is all about turning the wrists and hitting the ball square. It has helped a lot. It has made the swing simpler. I can notice a difference. I have a tendency to slice.”

Golfer start out by learning the steps of the swing, the balance you need and the grip required. Turn2blue also uses shorter clubs and tees set at knee height to teach the proper form before using a full sized club.

“As soon as I got going I started to learn very quickly,” Merriett said.

Salomon first started the technique at Tulane University and has taught it for more than 20 years. He said the enthusiasm shown by the juniors on the first day of the clinic is “wonderful and insane.”

The program requires little hands on coaching and is self-correcting. This allows young golfers to be able to pick up information and techniques that would normally take months or years to develop, he said.

The clinic starts with close to an hour of orientation so kids are familiar with the movement and motion the need. Afterwards, the kids are split up into teams. These teams compete for the best drives, the best accuracy, and the best distance. Competition is good for the kids, he said.

“They have accelerated with wanting to play and master their golf swings,” Salomon said. “The program is so simple they can gain the effectiveness of mastering their movement. They get into the competitiveness of the sport. They are able to describe what they have learned.”

Aidan Spillers was also taking part in the camp after the golf bug bit him this past year. He has played golf since he was about four, but after playing golf his freshman year at ACCCS, he dove head first into it.

“This past year I really started taking it seriously,” Spillers said. “They have helped out a good bit. What they are asking me to do it is just little suggestions to improve my game.”

The public can take lessons at Duncan Park on Monday afternoons and Tuesday morning by scheduling a time with superintendent Greg Brooking. It is an opportunity for people of all ages to learn the game of golf, Salomon said.