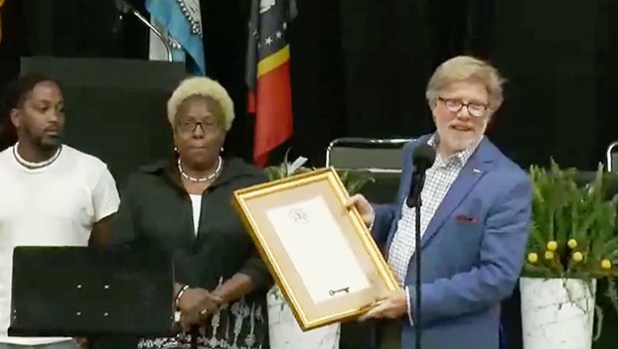 From left, late Rev. Kevin Deason’s son, Ken Curtis, and widow Caroline Deason are presented a key to the city by Natchez Mayor Dan Gibson during the second annual Day of Unity celebration on Monday in the Natchez Convention Center. 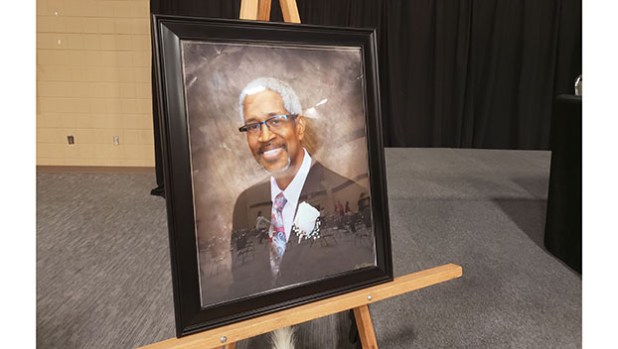 A picture of the late Rev. Kevin Deason rests on an easel in the Natchez Convention Center Monday during the second annual Day of Unity celebration. 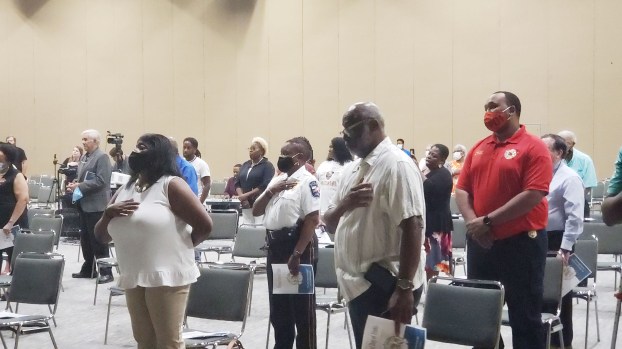 Natchez officials salute the American flag during the “Star Spangled Banner” on Monday in the Natchez Convention Center as they celebrate the second annual Day of Unity. 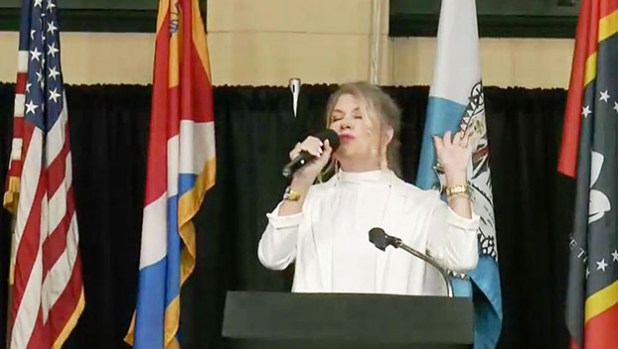 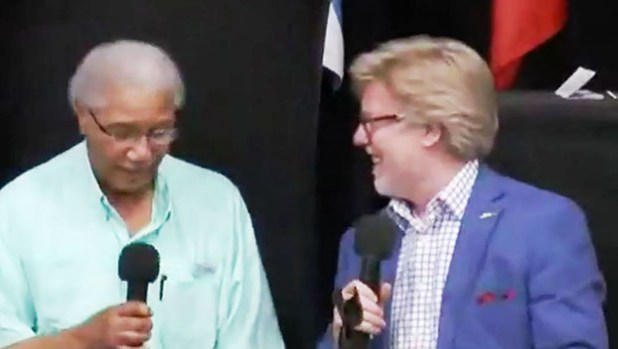 Musician YZ Ealey joins Natchez Mayor Dan Gibson in a dialogue about growing up in the Jim Crow era during the second annual Day of Unity celebration on Monday.

NATCHEZ — The Natchez Convention Center became like a church Monday as approximately 50 people — including public officials, citizens and clergy — sang and celebrated the Natchez-Adams Second Annual Day of Unity together.

The service was a spiritual and moving one.

Robbie Cade-Furdge and a choir of backup singers also swayed back and forth with the music as they sang the hymn “Stand.”

Caroline Deason wiped away tears while she and her family accepted a key to the city from Natchez Mayor Dan Gibson on behalf of her late husband, the Rev. Kevin Deason of New Direction Outreach Ministries.

Deason, who died in November 2019 with cancer, was focused on bringing the Natchez community together, Gibson said.

YZ Ealey joined Gibson for a dialogue about Natchez today and Natchez in the 1940s — when Ealey was growing up.

“I was born in 1937,” Ealey said. “It was hard for all Black people. The system was really bad and very unfair. … Most of the jobs were with sawmills and for women, more or less just domestic work. … Looking back, I would say the most opportunity there was for Black men and women were educators like school teachers due to the fact (schools were) segregated.”

Ealey said his life would have been a lot different if his mother had not taught him to “love and respect everyone, regardless of their race or color.” He said even though bad things happened in the past, he would not have found success if he had kept hate in his heart.

“A lot of people don’t even realize how far Black people have come and it was because of people like John Lewis and Martin Luther King Jr. and their followers. And guess what? They didn’t ever hate anybody. They didn’t fight a war with retaliation. All they preached was love and respect. Look at where we are today, with Black police officers. … That gives you an idea of how strong love is and how strong it is not to hate.”

The annual Day of Unity was established by Natchez and Adams County officials on Flag Day, June 14, 2020, in response to national unrest after the killing of George Floyd in Minneapolis by white police officers. Earlier on Monday, church bells rang throughout the city in celebration of the Day of Unity.

This year, the Day of Unity kicks off an entire week of events for the annual celebration of Juneteenth, which is a national holiday celebrating the emancipation of enslaved people.

The official day of Juneteenth is Saturday, June 19, which includes a day packed with fitness programs, games, food music and a parade on the Natchez Bluff. The celebration continues at 2 p.m. on Sunday at North Natchez Park and is free and open to the public.

For more information about the Natchez Juneteenth celebration, contact Jessica Hawkins at 601-445-7555 or email jhawkins@natchez.ms.us.