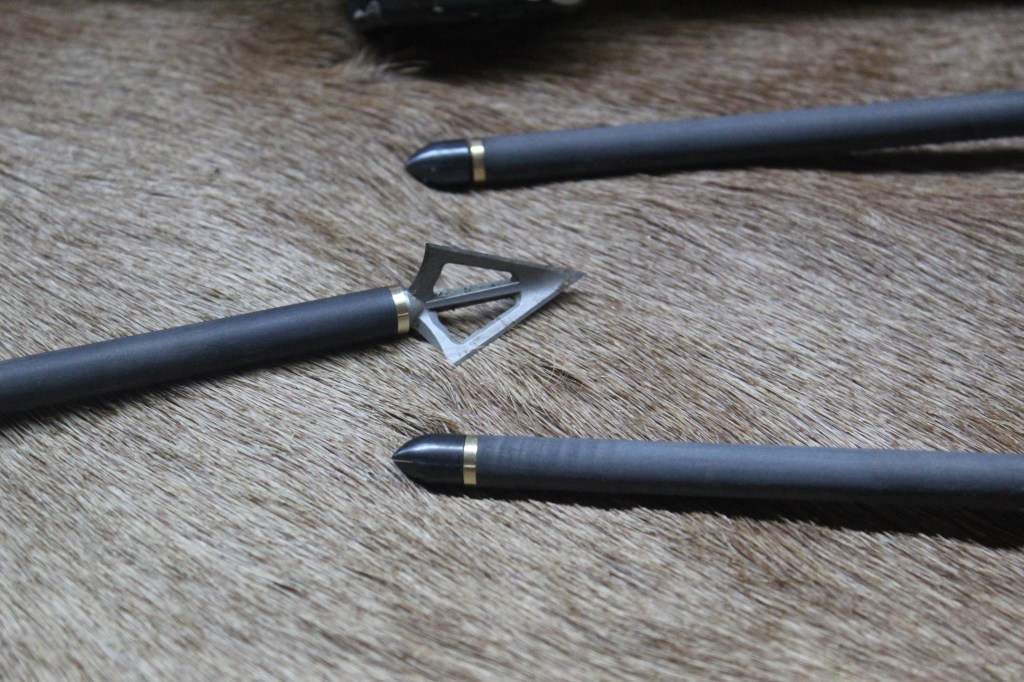 Above are different types of arrowheads. Top and bottom, field points are used for target practice. In the middle, a broadhead which is used in hunting. Broadheads are sharp like a razor, Homer Hewitt said. (Hunter Cloud The Natchez Democrat)

Bow hunting takes shooting, shooting, and more shooting for hunters to get better and comfortable, Bowie Outfitters employee Conn McCalip said. He has bow hunted since he was 15.

The summertime is an opportunity for hunters, especially those new to hunting, to practice and get better with their bows. Hewitt Archery owner Homer Hewitt said hunting with a vertical bow, such as a compound or recurve, is an art.

Hunters can practice with a crossbow and sight in their scopes during the summertime. Tim Mize, Sports Center and Rex Team Sports manager, said they sell targets made to stop crossbow bolts moving at 520 feet per second.

Hewitt said if hunters are shooting a crossbow, they should have a target made to stop a crossbow bolt. Crossbows shoot quicker, and a bolt could pass through a regular archery target not rated for high speeds. Hunter should check with Bowie, Hewitt or Sports Center to determine which target works best for the type of bow you are using.

People can practice using vertical bows in their backyard as long as they have a target and nothing beyond the target for their arrows. Hewitt said when practicing with a bow and arrow, you should use a field point that is the same weight as the broad points you use during the season. Sports Center Bow Technician Eric Perry said accuracy is more important than your arrow speed in bow hunting.

Bow hunters can shoot foam targets at 10, 20, 30 yards and set their pins to those distances. McCalip said people walk off those distances when practicing. He said for someone to truly get better at archery, they should take a tennis ball and throw it from the target.

“Where the tennis ball lands. They should shoot from there and try to estimate their distance,” McCalip said. “It is the best way to train yourself to calculate distances in your head. For most people at 30 yards, a rough estimation works well.”

He said he typically only shoots anything within 30 yards of him. Any further, the arrow takes longer to fly. He said in those extra seconds, the game you are hunting can turn, shift or move.

Being a good judge of distances is crucial during the hunting season because you will not have an opportunity to pace out the distance between you and your target. Hunters can do a few things during the summer to gauge distances in the woods. He said measuring your distances past 30 yards is crucial. At that distance, an arrow can be off by nearly afoot.

“At longer distances, the more critical it is that you have a range finder,” McCalip said. “A lot of people get in the tree and hit surrounding trees (with the range finder), so they know how far their range is. You can pace it off if you don’t have a range finder, but you need to do it before the season, so you do not leave your scent behind.”

Practicing on the range can help you gain confidence and be comfortable with your bow when you are in the woods hunting. There is one aspect of hunting you cannot fully prepare for.

McCalip said the feeling of buck fever, characterized by nervous shaking when game walks in range, hits him after the shot. He said he is lucky because he could not imagine having buck fever before taking a shot.

“You can’t simulate it. Not legally anyway,” McCalip said. “They say to wait 15 minutes to retrieve your game. I have no trouble doing that because I’m shaking, and I have to wait to calm down. I don’t think there is a way you can simulate it.”