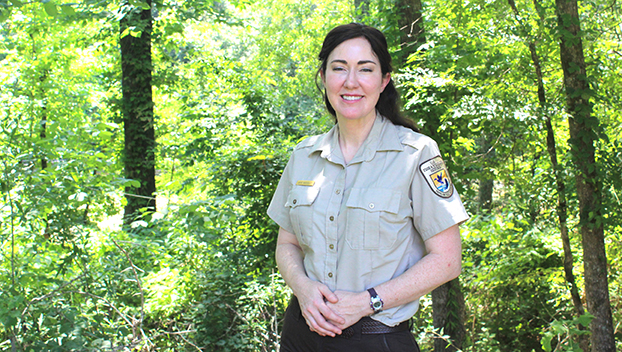 St. Catherine Creek National Wildlife Refuge manager Skye Kreisler is a week into her first job as a refuge manager and is trying to settle into Natchez.

Much like Johnny Cash, she has been everywhere. Her life has taken her from the Philippines to California, New Jersey, Chicago, Colorado, Corvallis, Oregon, Tulsa, Oklahoma, and finally Natchez.

Her first impression of Natchez was how green all of the trees were. The environment of the town also grabbed her attention.

“I like that it has a small-town feel even though I would call it a medium-sized town,” Kreisler said. “I like that there is a downtown area. There are suburbs that sprawl out. I like how some parts are still in nature.

The heat, humidity and vegetation remind her of home, she said. While she tells everyone, she is originally from San Jose, California. She actually grew up in the Philippines on a 12,000-acre mountain.

They had no running water, electricity was scarce and the scenery was very rural, she said. Until high school, she was self-taught through reading books. Her childhood was spent mostly outside.

“I was outside a lot. I had a lot of chickens, turkeys, ducks, goats and a horse named Patsy,” Kreisler said. “It was a culture shock coming to California. Everyone was into hair, makeup and boys. I had just been running around with flip-flops, climbing trees and playing with the animals. It was strange to live in the city, in a suburb and figure out American high school.”

During high school, she said she would go hiking with a friend while other kids her age spent the weekends going to parties.

She moved all over the country after high school, living in New Jersey, Chicago and Colorado. While working a regular office job in Colorado, she decided to become a forest ranger. She started volunteering with the Colorado Parks System to do trail construction and trail maintenance.

Her experience volunteering in the outdoors inspired her to work in the outdoors for a living, she said. Oregon State University in Corvallis, Oregon, was the next destination on her journey. There she studied wildlife management and got a master’s in natural resources by taking night classes.

From Corvallis, she got a job with the United States Fish and Wildlife Services in Oklahoma. She said she would ensure the Oklahoma Department of Transportation did not endanger wildlife or fish.

“This job will be one of the hardest jobs I’ve ever had,” Kreisler said. “This is what I have been preparing for. I feel I was hired because I think they saw me as the right fit for here.”

Driving from Tulsa to Natchez, she had to take Interstate 40 from Fort Smith, Arkansas until she got to Interstate 530 in Little Rock. From there, she traveled east around the outskirts of Pine Bluff before turning down US 530, then onto Arkansas 11 for a few moments before getting on US 425, which runs through Star City and Monticello, Arkansas.

On her home stretch down US 425, she was met by rain close to Crossett where she spent the night before finishing the final two hours of her journey from Crossett to Natchez.

She said as she drove through Bastrop, Rayville, Sicily Island and Ferriday she thought about her new start in Natchez.

“It’s time to start a new chapter in life,” Kreisler said. “I want to make this place my home. I want to find a house that I love. I want to find my people. I came out here by myself without knowing anybody, and I already feel like I have made some friends.”

Rebels use 7v7 to stay fit, have fun in…