NATCHEZ — Adams County Sheriff’s Office has identified a suspect of a 2018 burglary on Myrtle Drive using DNA recovered at the scene of the incident.

In 2018, ACSO deputies arrived on scene and the suspect fled on foot, according to a news release. While fleeing, the suspect reportedly cut themselves on a window and left DNA evidence behind.

Investigators sent a swab of the DNA to the Mississippi Forensics Lab, or crime lab and found the DNA matched J’landrick Davis. 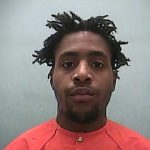 Davis is already being held on a charge of burglary of a vehicle in connection to a string of automobile burglaries in the Beau Pre neighborhood in April.

Davis has received an additional charge of burglary of a dwelling in connection to the incident in 2018. Investigators were also able to lift fingerprints from a vehicle in the Beau Pre burglaries that has been confirmed by the Mississippi Forensics Lab as belonging to Davis, the news release states.