NATCHEZ — A woman accused of shooting and killing her boyfriend is back in the Adams County Jail.

Jessica Aldridge, 34, who has been out on house arrest awaiting trial for the death of Joseph Cupid, 41, has been arrested for violating court orders. 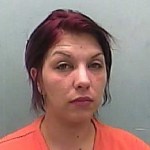 Adams County Sheriff Travis Patten said Aldridge was arrested Thursday on a charge of contempt of court and has not received a bond as of Friday.

“There is only certain places she is allowed to be for emergencies, such as church, the grocery store and places of that nature and she has to be back in her house by a certain time. (Judge Lillie Sanders) got wind that she had been seen out in places she was not supposed to be after curfew and issued and order for her arrest for violation of bond conditions,” Patten said.

Aldridge, 34, is awaiting trial for the murder of Joseph Cupit, 41. Aldridge is alleged to have shot him outside her residence on Benbrook Road on March 17, 2019. Aldridge was released from the Adams County Jail about a year ago because of COVID-19 health concerns.

Aldridge was reportedly pregnant with another inmate’s child at the time of her release on house arrest. Her bond was reduced from $200,000 to $100,000 in April 2020 by order of Judge Debra Blackwell after the court received medical documents to prove that being incarcerated at the jail would be a health risk to Aldridge.

According to Blackwell’s court order, Aldridge was ordered to stay at home and wear an electronic monitoring device and pay the device’s monthly service fee.

The office of Sixth District Attorney Shameca Collins filed at least two separate motions to have Aldridge’s bond revoked because Aldridge allegedly had not been following court orders by being out in public.

Sanders has since granted a motion from Aldridge’s attorney Cynthia Stewart for Collins’s office to be recused from the case. Sanders said she approved the recusal a precaution to avoid issues during the court process.

Stewart’s motion stated that Aldridge spoke with attorney Paul Sullivan about her case before Collins was elected and Sullivan became her assistant district attorney.

Stewart, also filed a motion to change the venue of Aldridge’s trial. Sanders said the court cannot deal with any new motions until new prosecutors take over the case.