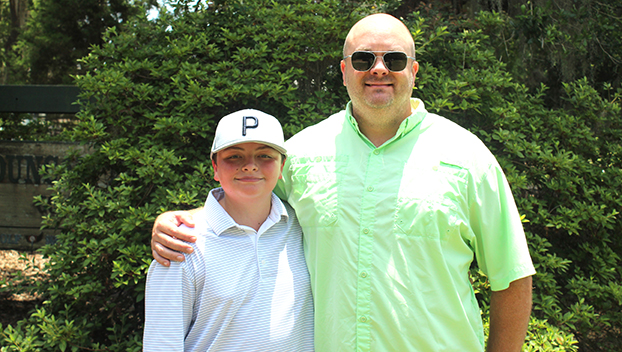 At left, Aidan Spillers and his dad Luke Spillers spend a lot of time on the golf course at Duncan Park. Aidan was there for a junior golf clinic last Monday. (Hunter Cloud The Natchez Democrat)

NATCHEZ — Adams County Christian School golfer Aidan Spillers has played the game of golf since he could swing a club as a four-year-old.

This year, the freshman started playing golf as much as he could. His dad Luke Spillers said Aidan was bitten by the golf bug and all he wants to do is golf. Their connection to the game of golf begins with Aidan’s introduction to the sport.

“My dad was the person who ultimately taught me the sport,” Aidan said. “He taught me this game. I remember growing up when Tiger was in his prime. Every Sunday when there was a major tournament, we would watch it together on T.V.”

Luke stopped by Duncan Park to pick up his son after he was finished with a golf clinic taught by Khater Salomon. Aidan said if he could be on the course all day, every day, he would.

As Spillers was working on correcting an issue with his swing, Salomon gave him pointers and calmly instructed him to twirl the golf club like a toothpick.

Spillers said the techniques used in the clinic were a bit different from what he is used to. It was his first years to do to the clinic, he said. Like a lot of golfers, he said he talks to himself mentally while playing golf.

“I tell myself do not kill it. My main tip for other golfers is to stay calm,” Spillers said. “Don’t let it get in your head. I’m my own worse competitor. I just get in my own head, and my conscience takes over.”

Every Sunday, the father and son go out and play a round of golf together. On the course, they share moments and time together.

Aidan said they talk about the game and grow closer together on the course. He said he and his dad also talk about his dead grandfather, who also played golf.

“We talk about how he made two hole-in-ones,” Aidan said. “We just talk about golf and the moments my grandfather had. Everything we do is Golf, golf, golf and golf. Playing golf a lot has brought me closer to my dad. We have really gotten closer together, and golf is our way to bond together.”