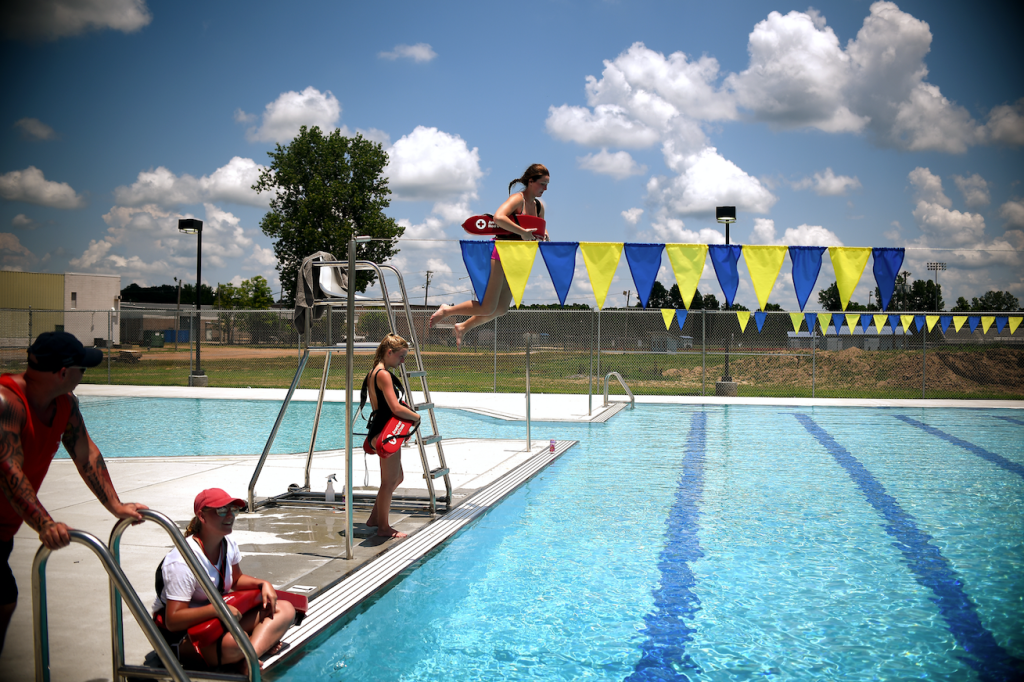 Tiffany Buckles, jumps into the water during a training exercise to become a lifeguard at the Natchez community pool in 2018. (File photo | The Natchez Democrat)

NATCHEZ — Future management of the community swimming pool and soccer field near Liberty Road is in limbo as the City of Natchez and Adams County wait to negotiate a new recreation agreement.

For more than a decade, recreation for the city and county has been managed jointly by a volunteer recreation commission, which consists of nine members appointed evenly by the Natchez Mayor and Board of Aldermen, Adams County Board of Supervisors and the Natchez Adams School District Board of Trustees.

However, during Monday’s meeting of the Adams County Board of Supervisors, officials talked again of the disbandment of the recreation commission.

Supervisors said they had been holding off from appointing new members to fill vacancies on the recreation commission until a new inter local agreement is made.

Board attorney Scott Slover said he presented the City of Natchez with a draft of a new inter local agreement that would split the responsibility of the pool and nearby soccer field between the Natchez Mayor and Board of Aldermen and the Adams County Board of Supervisors and leave each board to oversee their own parks.

“The city’s response to that was do we even want to have a recreation committee at all,” Slover said. While the boards do not have an updated agreement, Slover said the swimming pool and sports programs would continue to go on following the old agreement.

“The whole idea when we did (the inter local agreement) was to keep politics out of it,” Board of Supervisors president Angela Hutchins said. “We have a board for everything, such as the airport and E911, so they could deal with those issues and take that off of us.”

Now that summer is here, Ware said he was concerned about hiring people to work with the possibility of the commission not being able to write checks.

“Someone needs to make a decision or pull the trigger,” Ware said. “… We can’t hire anyone because we don’t know where we stand.”

After the Board of Supervisors meeting on Monday, Ware said things have ran smoothly apart from uncertainty about where the city and county stands on the recreation commission. He said the commission sends invoices to the city and county boards and they have been splitting costs evenly. Most expenses have been covered by pool memberships, grants and community sponsorships, Ware said.

“We’ve been busy,” he said. “… If the money isn’t there then we get in a bind. We’re unsure what they want to do. This is the second time (the meeting has) been canceled in three months. I need some clarity. The recreation board needs some clarity.”