18-wheeler takes out power lines near Walgreen’s; traffic backs up on U.S. 61 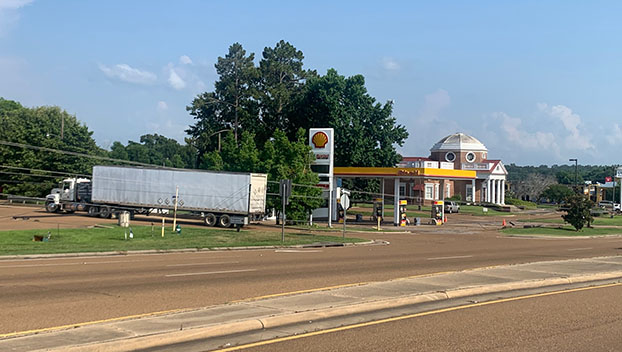 This 18-wheeler took out three power lines as it turned into the Walgreen's parking lot, causing power outages for almost 500 customers and backing up traffic in both directions on U.S. 61 in front of Merit Health Natchez. (Hunter Cloud | The Natchez Democrat)

NATCHEZ — An 18-wheeler apparently turned into the Walgreen’s parking lot at about 3:50 p.m. Wednesday and took down three power lines with him.

Natchez Police Lt. Ben Hewitt said the incident happened at about 3:50 p.m. In addition to backing up traffic at the intersection across from Merit Health Natchez, about 470 lost power at one point, including in the Fatherland Acres neighborhood behind Walgreen’s. About 48 customers remained without power at this writing.

Hewitt said personnel from the fire department, as well as the public, help direct traffic away from the scene.

“The heat is all we have to deal with now.”

Shrek the Musical Jr. showing this weekend at Natchez…