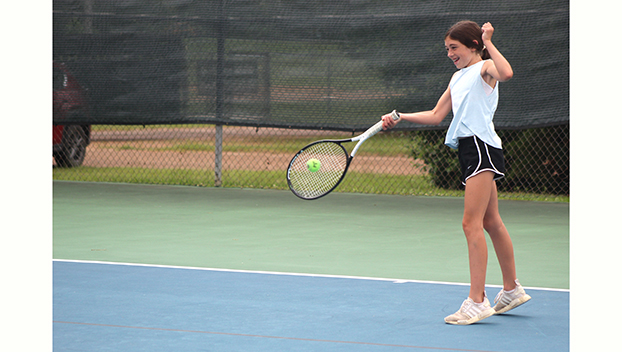 NATCHEZ — A playmate whirled as it spits out tennis balls to juniors waiting in line to hit. Anna Arthur returned a ball hitting the machine in the middle of its base.

Arthur said she is going into the sixth grade and has played tennis throughout this year. Duncan Park Tennis Director Frankie Spence coaches her to be better. He is also a contrast to the reason she loves tennis. Spence jokes loudly with the players in practice and called Anna “Ms. Hollywood” during their drills Wednesday.

“I enjoy tennis because you get a lot of independent work and it’s a quiet game,” Arthur said. “He’s kind of odd. He’s funny and weird. My backhand has gotten better. He helps me learn a lot of things, my forehand topspin and my serve. He is kind, some of the time.”

She said she learned to hit the ball further from when she first started the tennis camp. Her serves have gotten better all with the help of drills. In one drill, players are tasked with tracing the line their rackets should follow. In another drill, they learn to push the ball with the tennis racket and taking the net out of play.

As the hot sun peaked through the clouds, volunteer coach Talton Trickey wore a Panama Jack hat and controlled the ball machine. He caught a few balls returned by players like Arthur. She said she likes when they work with the ball machine.

Trickey hit balls to the juniors in one drill. A few of his shots had Heath Isbell running all over the court. Isbell said he is going into the 7th grade his favorite drills are any involving the ball machine. Isbell wore a black t-shirt with a baseball player on it at practice.

He said he plays baseball in the afternoons, and tennis does not affect his swing. This year is his first year to play tennis, he said. Spence said he coached his dad Trey Isbell in tennis.