UPDATE: Man dies after he collapsed suddenly during Natchez Board of Aldermen meeting 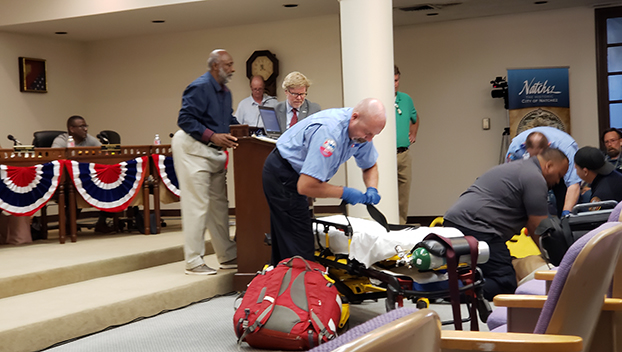 First responders and officials help a man who passed out suddenly in the Natchez City Council Chamber Wednesday. (Sabrina Robertson | The Natchez Democrat)

NATCHEZ — A man who collapsed in the City Council Chamber during a special called meeting of the Natchez Mayor and Board of Aldermen Wednesday has died.

Lee Nelson, 70, was making a presentation about blighted property in his Daisy Street neighborhood in Ward 4. During his presentation Nelson suddenly collapsed and stopped breathing. Officials did not report the cause of Nelson’s death as of Thursday afternoon.

Officials called 911 and Natchez Fire Chief Robert Arrington performed CPR until an ambulance arrived. However, he was unresponsive.

Natchez Mayor Dan Gibson adjourned the meeting with a prayer for Nelson and said it would be resumed at a later date.

He later confirmed that Nelson had died.

“Our hearts go out to the Nelson family. It shouldn’t be forgotten that in his last minutes of life he was passionately speaking out for much needed improvements in Natchez. We need to take that seriously. We as a community need to be better stewards of our property, understanding that dilapidated areas do not speak well of a city that is poised to do so much,” Gibson said.

Gibson said Wednesday’s meeting was his first time meeting Nelson and speaking to him and that he wished he could have known him better.

“We very much appreciate his passion for this community,” Gibson said.

Of the neighborhood Nelson made his presentation about, Gibson said, “We will be looking into it right away. We owe him that much.”

Before the incident, Aldermen unanimously approved minutes of prior meetings. No other actions were taken.

“It is an unfortunate thing,” Ward 4 Alderman Billie Joe Frazier said of Nelson’s death. “He was the type of man who cared a lot about his neighborhood and he was concerned. That is why he was there yesterday. … The neighborhood has had problems for years and years before I was elected. We as a board have been having meetings to address it. It is unfortunate that this happened.”