Miss-Lou has much to do to celebrate Independence Day 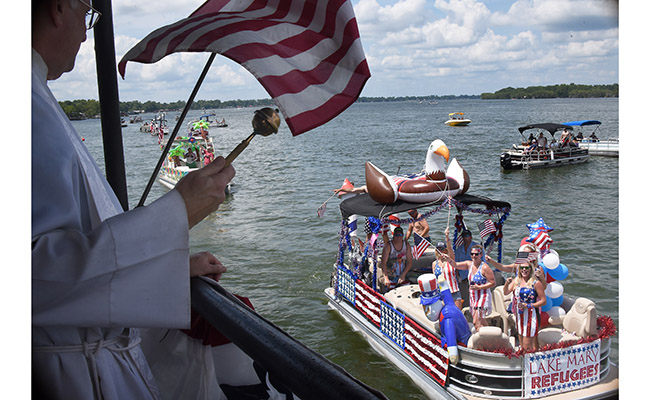 Rev. John Pardue blesses a boat at Lake St. John during the 2018 Flotilla in Ferriday

NATCHEZ — The Miss-Lou has a lot planned for Independence Day weekend, with a much-anticipated concert starring Hank Williams Jr. on the Natchez bluff, the display of fireworks on the Mississippi River and the long-celebrated Lake St. John Flotilla.

The Flotilla, a water parade of both decorated and undecorated boats, takes place on the first Saturday in July each year on the lake in Ferriday, La.

While some vessel captains opt for traditional red, white and blue-decorated boats, many participants get creative with themes for their boats ranging from pop culture and political references to everyday humor. Boats can be seen anywhere on the lakeside and festivities support the cleanliness and upkeep of Lake St. John.

The Lake St. John committee, led by the late Donna Maroon, began hosting the event in 1992. Maroon died in February of this year and other members of the Flotilla committee are carrying the torch of the event.

“It is with a heavy heart that we dedicated this year’s Flotilla, artwork and festivities in memory of Mrs. Donna Maroon, whose passion and love for the lake and its residences was unmatched,” organizers said. “Mrs. Kari Blaney and Susan Harris are carrying the torch this year to ensure this year’s Flotilla festivities are bigger and better than ever.”

The Flotilla begins with a blessing of the boats at Steckler’s pier from the Rev. John Pardue.

Registration will be at Spokane Resort from 10 a.m. to 12 p.m. before the Flotilla begins at 2 p.m. The procession on the lake will be led by Concordia Parish Sheriff David Hedrick. Participants may also receive cash prizes starting at $300 to as much at $2,500 for the grand prize. In the spirit of America’s birthday, fireworks will light up the lake after dusk.

Silas Simmons “Sim” Hicks II, formerly Natchez, is the artist for this year’s event posters, t-shirts and merchandise, which are sold at Spokane Resort to support the event.

Hicks was injured in a diving accident at age 17, which has left him paralyzed.

“It was such an honor to be chosen to design this year’s Flotilla artwork,” he said. “I learned to ski, knee board and have so many wonderful memories of summers on the lake. I really hope after a really hard year for everyone we can all come together to have an amazing weekend.”

This year’s 2021 Grand Marshall Kippy Blaney has lived in the Miss-Lou 62 years. He was born in Natchez but Lived in Concordia Parish for 44 years.

Blaney said he is thankful to “all the sponsors who have helped make this year’s Flotilla one of the biggest and hopefully best yet.”

For more information on the Flotilla visit www.lsjflotilla.com.

Festival organizer Arden Barnett of Ardenland said the outlook of the show is good with somewhere in the neighborhood of 7,500 attendees.

Williams will be performing with guest stars Steve Earle and the Dukes, The Reverend Peyton’s Big Damn Band and River Dan.

Gates open at 1 p.m. for the show to begin at 3 p.m. Tickets start at $55 while children six years old and younger can attend for free. The concert will be wrapped up by 9 p.m. and finish with the annual Fourth of July Fireworks show on the Mississippi River, which is put on by organizer Sabrina Doré, pyrotechnic Curtis Elkins and the Vidalia Dock & Storage barge service, and a team business and individual sponsors from all over the Miss-Lou.

The fireworks will be viewable anywhere from the Natchez bluff or Vidalia riverfront and are not just for festival attendees.

More information regarding the fireworks show can be found at missloufireworks.com.

To purchase tickets to the Hank Williams Jr. show in advance, visit ardenland.net/shows.