D.K. McGruder champion at plate, on the base-paths 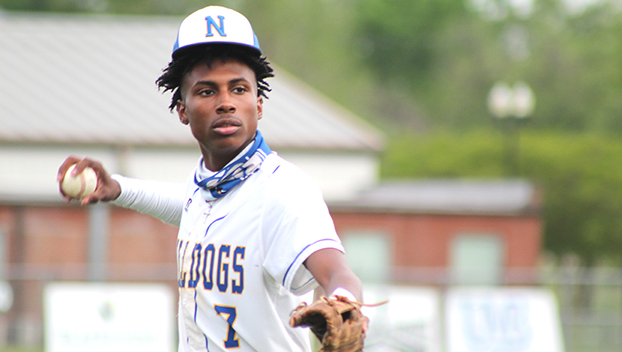 DeKaron McGruder led Natchez High School at the plate batting .492 and he stole 41 bases making him the 2021 player of the year. (Hunter Cloud The Natchez Democrat)

Natchez High School Bulldog DeKaron McGruder led his team to a district championship batting .492, and he had 41 stolen bases. His offensive performance makes him the Miss-Lou baseball player of the year.

McGruder said COVID did not impact his game this year after it cut the 2020 season short. He said he found a way to work hard and hit at the batting cages every day leading up to the season.

“I am always trying to get better,” McGruder said.

One day, he said he hopes to play in the Major Leagues for his grandma Myles McGruder. She watched a lot of his games before she passed away five years ago, he said. Her memory has become his biggest inspiration, he said.

“She is really the person who kept me going. She supported me. If it was not for her, I wouldn’t be here,” McGruder. “When she passed, it just made me work harder. It made me want it more.”

His speed on the base paths is quick. Head Coach Dan Smith said McGruder took 3.9 seconds to get down the first baseline at a showcase in Georgia last week. Natchez is aggressive on the base paths, stealing 214 bases in a single season. McGruder fits the team’s mold as he said his mentality is to attack with his legs.

When he is not playing, McGruder said he is helping the team’s freshmen improve in practice. McGruder finished his junior year this spring, and he is a senior this upcoming season.

He said he still has room to grow ahead of the next season, and the summer league in Georgia is helping him get better for it. Team Georgia is made up of other great athletes and players pushing him to be better, McGruder said.