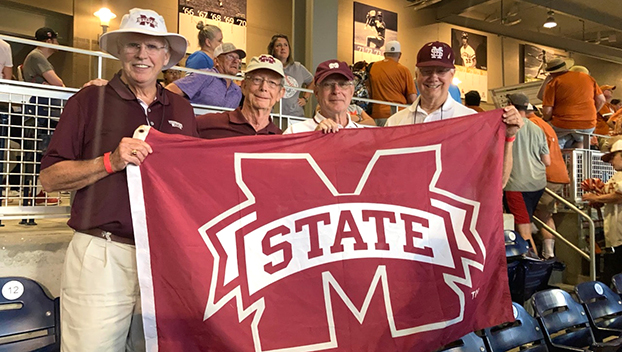 OMAHA, Neb. (AP) — Tanner Leggett’s single in the bottom of the ninth inning scored the tiebreaking run, and Mississippi State advanced to the College World Series finals with a 4-3 victory over Texas on Saturday night.

The No. 7 national seed Bulldogs (48-17) reached the finals for the first time since 2013, when they were runners-up to UCLA. Mississippi State will play No. 4 Vanderbilt in a best-of-three series starting Monday night.

Vanderbilt (48-16) got its spot in the finals when the NCAA removed North Carolina State from the tournament because of COVID-19 protocols. Vandy and NC State were supposed to play a bracket final on Saturday, but that game was declared a no-contest.

Leggett, who had entered the game as a defensive replacement in the seventh inning, came to bat in the ninth after Cole Quintanilla hit Kellum Clark with a pitch.

Brayland Skinner pinch ran for Clark and stole second before Leggett drove a 1-1 pitch into left-center. Clark came around to score easily, and Leggett rounded first base and tossed his helmet into the grass as teammates rushed to mob him.

Mississippi State started Will Bednar, who had 15 of the Bulldogs’ CWS-record 21 strikeouts in a 2-1 win over the No. 2 Longhorns (50-17) last Sunday.
Bednar was solid again, but not untouchable, striking out seven in 7 1/3 innings. Cam Williams homered to right field to give Texas a 2-0 lead in the second, and Douglas Hodo III doubled leading off the fifth and scored on Mike Antico’s two-base hit for a 3-1 advantage.

The Bulldogs tied it in the sixth on Logan Tanner’s RBI double, and threatened to go ahead after loading the bases with none out.

Quintanilla (5-1) relieved Texas starter Tristan Stevens and got a force at the plate and two strikeouts to work out of trouble. Quinanilla allowed only one hit before Leggett’s winner.

MSU closer Landon Sims (5-0) took over for Bednar with a runner on base and one out in the seventh, and ended the inning with two strikeouts. Sims retired five of the last six batters he faced.
___
More NCAA baseball tournament coverage: https://apnews.com/hub/college-world-series and https://twitter.com/AP_Top25