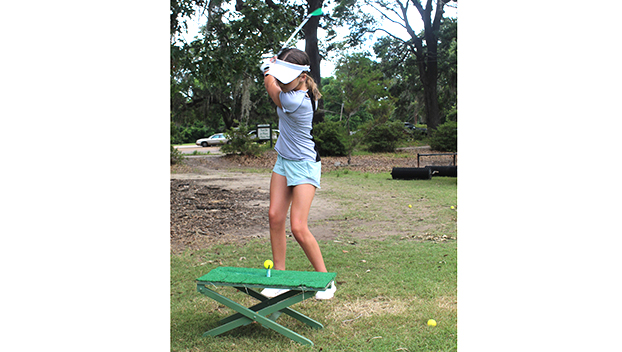 Kate Whitman swings a club during the Norman Puckett Junior Golf Clinic held at Duncan park. Whitman said she is excited to play in the junior golf championship to be played July 6. (Hunter Cloud The Natchez Democrat)

NATCHEZ — Local junior golfers could participate in the 2021 Natchez Junior Golf Championship. The tournament will take place at the Duncan Park Golf Course with tee times starting at 10 a.m on July 6.

Duncan Park golf course superintendent Greg Brooking said the tournament was scheduled for Monday, but the day is a holiday. He said he moved the championship to Tuesday, July 6.

Brooking said he didn’t realize Monday was a holiday until recently. When he realized it would be a holiday, he had no choice but to move the tournament. Starting tee times were moved from what would have been 8 a.m. to 10 a.m. for the championship Tuesday. He told kids about the change Monday morning as they attended the camp at Duncan Park. He said children not participating in the camp have an opportunity to play in the tournament.

“You need to go to the junior camp to play in the tournament for free, but if someone turns up, they’re not going to be turned away,” Brooking said. “Any child can sign up for $35.00.”

Brooking added that registration is already underway, and junior golfers can register right up to next Tuesday morning. He also said that only players from this area — Natchez, Vidalia, Ferriday, Bude and Meadville — could play in this particular tournament.
Age groups for boys and girls will be six through 11 years old and 12 through 16 years old. Brooking noted that everybody’s going to play a circuit of three holes each time.

Brooking said there are already 24 junior golfers who have participated in the junior golf camps this month. He said approximately 20-25 youths would play in next Tuesday’s tournament, which he described as “a fun tournament.”

“We’ll have pizza and treats after the tournament,” Brooking said. “The kids are going to walk. They’re not going to ride a cart. We’ll rent golf carts for parents for $10.00 to watch them play.”