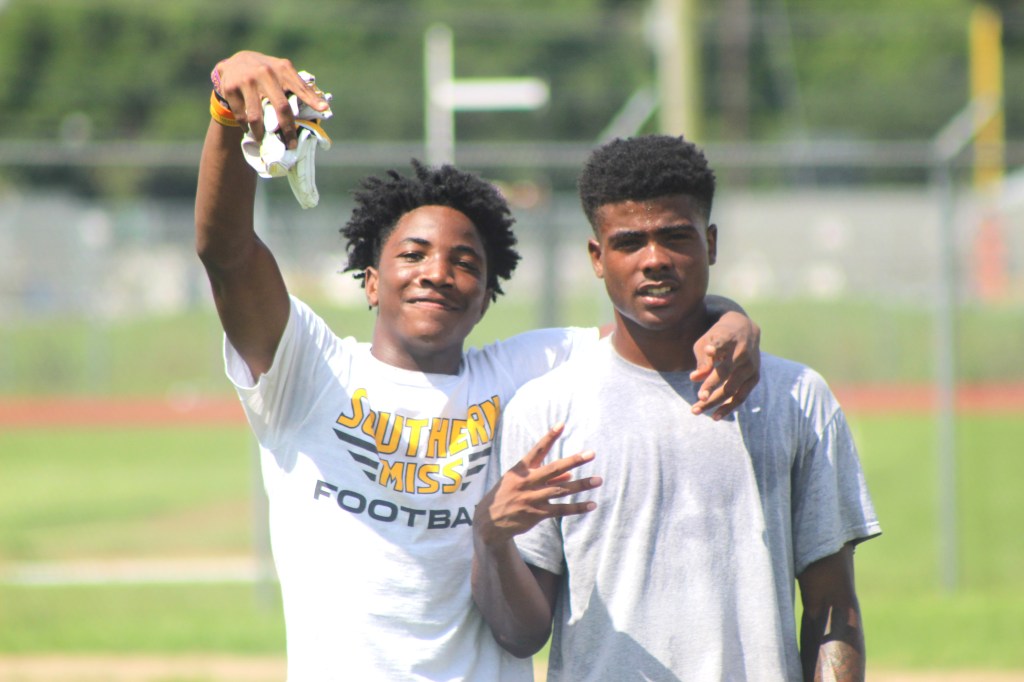 Natchez High School wide receivers Michael Williams Jr. and Damarcco Blanton tossed the football to each other after summer workouts Tuesday morning. Williams and Blanton are juniors and share a friendship on the football field.

“I can say every position has a bond with each other,” Williams said. “We have a lot of young receivers. We got to make sure they know everything.”

Summer workouts are an opportunity for Williams and Blanton to teach younger kids more about the game. Additionally, it is a chance for the Bulldogs to learn a new offensive scheme.

Offensive Coordinator Sidney Davis is new to leading the Bulldog offense, but he brings experience from playing at Troy University. Davis was on a Troy team that beat Louisiana State University on homecoming night in Death Valley, he said. Williams said Natchez’s offense is going to be different than in previous years.

“It will be a simple offense.,” Williams said. “We are rebuilding right now. We have a lot of young kids. We don’t have that much time, but it will get better. The tempo will be faster. We are not going to get in the huddle in-between plays. This is our first year trying that.”

Summer workouts improved the receivers as a group, he said. Lifting weights and drills on the practice field have made him stronger and added more muscle weight, he said

This football season, William said his goals are to make first-team all-state, earn scholarship offers and for the Bulldogs to make the playoffs. He already has numbers to target this year.

“I want 15 touchdowns and at least 1,200 yards,” Williams said. “I was close last year, but COVID cost us a game. I want to make sure I stay on the right path.”

Basketball was his first love, but in eighth grade, he started playing football. He started taking the game seriously and is now competing in 7v7 camps to improve as a player.

7v7 camps allow him to get exposure with colleges, he said. Williams has not received any offers yet. He said the 7v7 camps have improved his releases, and the competition with better athletes has pushed him to be better. Last week he earned a top performer recognition at the Southern Elite Combine at Co-Lin Wesson.

He said Green Bay Packer receiver Davante Adams is his favorite player. Williams said he likes the way he releases and how he runs routes. Adams is a player he tries to emulate on and off the field, he said.

“I try to look at his videos and work on my releases,” Williams said. “The biggest lesson I have learned on this field is to work hard. Do not mess up yourself. Don’t cheat yourself because it will catch up to you.“